And What to Do After Running Out of Spells

After you cast your spell(s), there's no need to sit and mope.

Spellcasters provide unique challenges for players because there are a lot of rules that pertain to the magician class.

In this installment of our Road to Redemption series, let's continue building out our team of Iconic characters and look at the magician class next.

Mages are often considered a harder class to play for new players because they begin as relatively under-powered. After they fire off that one memorized spell, inexperienced players often feel "left out" or "not useful." Sometimes, you might have a memorized spell that never even comes into play during the entire session.

Every adventurer in the party needs to work together to provide help, but the magician has to work a lot harder. Mages start with only a dagger, and they can't wear armor. They don't have any Fighter skill, so new players often opt to hide or play a minimal role in a fight.

However, there is actually a lot a mage can do, if you figure out how to utilize everything at your character's disposal.

Varg is a Human Magician from the sample characters (DHB, p. 142). He is careful, thoughtful, and a bit of a loner. He serves as the group cartographer. He's an integral part of the team we've been building out in the series, and we'll use him as our example.

In 1st edition, the Elven Ranger served as a warrior-wizard, but 2nd edition changed both the Ranger and Mage to distinguish the two classes. Now, the Ranger no longer casts spells like the Mage.

However, if you play with the Optional Rule: Weapon Proficiency (Middarmark, page 51), your mage can learn to use a weapon over time. Being able to use a sword or bow goes a long way in a martial conflict, but it is something you should plan as a part of your team strategies as you create your character. In order to learn to fight, you'll need someone who can mentor your mage in the fighter skill, or you will need to hire an instructor in town. Plan accordingly.

It's going to take some time to build up those Mentor successes to unlock the fighter skill and then also learn the weapon. However, Varg has Skirmish-wise, which allows him to throw in a die into the pool for tests related to small battles or kill conflicts. Using a Wise is a great way to substitute for help for skills the mage does not possess. I am Wise and "help" are similar but subtly different. Check out I am Wise (DHB, p. 77) for more about those differences.

Varg can also use a Wise to "help" fighter tests, like adding a die for Disposition in a Kill Conflict. Check out the Conflict Round Example (DHB, p. 255) to see how Varg participates in the conflict without the fighter skill.

Because a magician starts with limited abilities, the mage's starting wise is extremely important, and you should coordinate with the other players regarding the team specialties. For example, you might have your mage take Trap-wise to provide +1D aid for a dungeoneer disarm trap test. Trail-wise works well for providing I am Wise assistance for Pathfinder tests. Figure out where the team is weak and in need of some extra support and then set your wise to add to the mustered dice.

Using I am Wise is also fun. You get to roleplay pointing out mistakes, facts, or ways to do things that keep you involved in the action instead of sitting on the sidelines. Plus, using a wise in this way insulates your character from conditional failure. Your mage won't take a lesser condition like the other helpers because he used the wise to provide support instead of a helping skill.

While we are talking about helping out others with your mage's wisdom and wises, you should also plan to rack up Persona points from the Teamworker end-of-session reward. Even if your mage is a loner like Varg, you can still play him as the voice of reason that keeps the group together or goes out of the way to make sacrifices or burn rewards to help the group.

Traits are vital to your success, after all your spells have been used. Try to save your traits for any beginner's luck tests you might have planned or expect for the adventure.

On the other hand, your mage should be a check-earning monster. You're going to need a lot of checks for making scrolls, creating elixirs or potions, or passing the check to the party mentor. Varg has the Thoughtful trait, which is great to get yourself into trouble and earn some checks when time is of the essence.

Now that you've got a few checks, your mage should excel in camp phase. Varg has the instinct to make maps in camp. Since it is an instinct, he can't get help as easily as an ordinary test, so he plans to map a couple of areas at a time to keep his obstacle factors low.

Instincts to make elixirs, flammables, scrolls, or potions in camp also work well. Check out the alchemist factors for some ideas of how you can continue to help and be the over-achieving teamworker during camp phase.

Varg has a Nature of 4, which is pretty good. During character creation, plan to get your Nature as high as you can. Later, using all that Persona, tax Nature down during heroic feats. Low Nature makes it easier to learn new skills.

Take good notes, so you can deliver the prologue and get those precious Nature points back at the beginning of the session (every other session, technically). Pay your bills in town, so you can earn back those points when leaving town as well.

Try to avoid taxing Nature on vs. rolls or tests where you expect to fail because your Nature will go down by the Margin of Failure. You're playing a dangerous game of balancing a low nature without reducing your nature to zero. Tread carefully.

Also, if your mage has the "running" nature, plan on using it a lot. You'll want to keep building up your Nature to strive toward a rating of six. So, run, run, run to earn advancement!

For more on using Nature, check out Nature Demystified.

Using gear or spells in creative ways can earn you a Good Idea. Having your mage land a Good Idea for a free test goes a long way in contributing to the team because you are keeping the turn count low and moving the party forward without the consequence of failure.

I like to give the mage all the strange junk found from looting the dungeon. Leaves, a piece of string, or a chipped bowl might provide our arcane MacGyver the necessary ingredients to concoct some brilliant solution to overcome the situation. You can also give the magician the useful gear like rope, garlic, or mirror to craft something clever. If appropriate, these items might count as supplies or gear for the 2nd level benefit Needful Things.

The Lightness of Being spell is another way to circumvent obstacles. It is a spell that allows the targets to bypass a test involving climbing or descending from a great height. I've seen all sorts of inventive ideas with this one!

Finally, scrolls are great. Plan on making a lot of scrolls. Carry sacks full of scrolls and use them liberally as often as you can. Casting spells don't advance the grind, and using scrolls is a great way to supplement what you are already doing in all of your other actions.

Joseph "Chalk" wrote an excellent BWHQ forum post on some of the mistakes he made on his first arcane character for the 1st edition. 2nd edition fixed a lot of the issues, such as requiring a magician to have a mentor and changes to the Loner/Orphan setup. Still, there is valuable experience and wisdom in keeping in mind where your mentors is located and where your home library is stored.

The main hurdle that new players struggle with is mastering the arcane casting process: learning, memorizing, scribing, and casting spells. 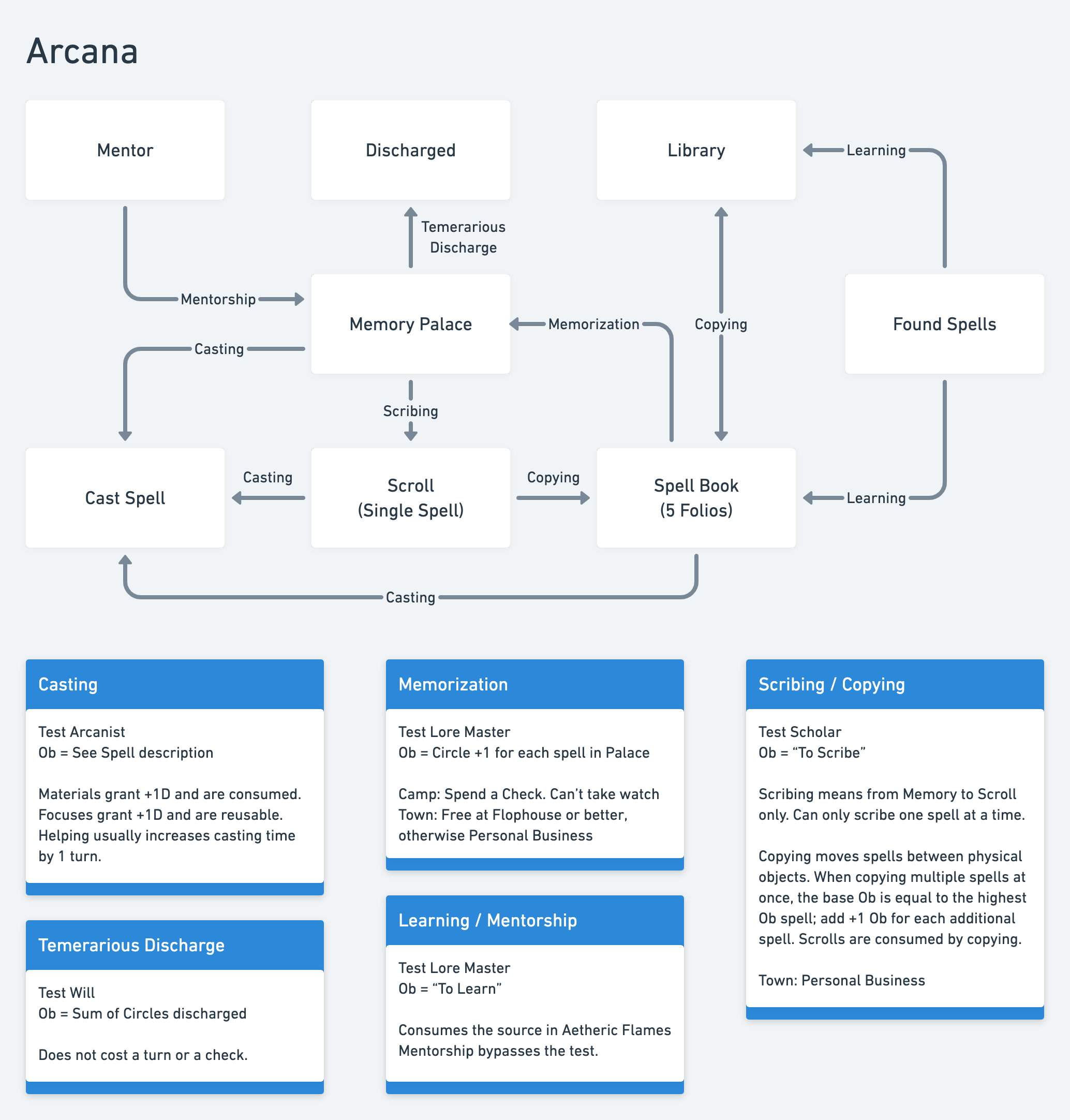 There are other advanced tricks. Carrying extra scrolls (pack 1) and a second spell book (pack 2) vastly increase the mage's arsenal at the expense of loot-carrying capacity. So, the mage must coordinate and balance inventory carefully. Another trick is if you find a higher-level spell scroll that requires more memory palace slots, the mage can still add it to the library, copy it to the spell book, and then cast it directly from the book. This allows the mage to cast more powerful spells without memorizing.

The 2nd edition Magician has new level benefits. In particular the 2nd level Gifted ability is insanely useful–especially once the mage reaches maximum skill rating in Arcanist. The 4th level Mage Light can also take the adventuring party to another level by having a consistent and reliable light source. At first, it does not generate much light, but by 6th level, it provides light equivalent to a lantern, which is all a party of three needs.

Magicians, like any class, have an entire arsenal of tactics to employ. Early-level mages must really master and embrace the game's cycles and economies to contribute to the team. As magicians increase in level, they get more spells and become more capable. Until then, hold fast, brave adventurer!

Whether playing at a convention or firing up a one-shot adventure, there are times when you are looking for not only pre-generated characters but a pre-gen team.