Getting the most out of your Torchbearer NPCs with the least work possible.

Previously in the Master's Manual we have explored how to balance a session, how to estimate the difficulty of obstacles, how to gauge the relative power of monsters, and how to make sense of unusual conflicts. All of this should help you make the most of the dungeon (or adventure site), but there's more to the world of a Torchbearer campaign than simply dungeons and/or dragons. Today on Mordite Monday we're going to dig into NPC stats!

So you've got plans to Game Master some Torchbearer for your friends. You've had a look at "You All Meet at an Inn..." and you see how the game has built-in hooks for Friends, Enemies, Mentors, etc. Pretty cool! Now, what do you actually need to know about all of these characters?

You definitely don't need to flip open to "You All Meet At An Inn..." and start filling out a full character sheet from scratch. I mean, if you want to, that's fine. But you'd be wasting your time, because 99.9% of players will never know or care that you put that level of work in. All you've really done is limit your options.

Game Mastering is a Performance

The secret to great, compelling Torchbearer NPCs is to focus on only those aspects that the players will actually interact with in gameplay. Like any performance art, you have a script which may be brilliant (or trash), but it's the actual presentation of those ideas on stage (or at the table) which really matters. It doesn't really matter what Home Town the evil doctor NPC came from, or whether his "Corpulent" trait was available therein. What matters is the moment when you add that extra die to his pool and you tell the players "He hurls the full force of his corpulence at you to drive you back!"

The Torchbearer rules have a little quirk regarding NPCs that can take getting used to, but once you understand it life becomes much easier for the GM. Torchbearer NPCs don't actually test for anything. They help or they oppose the players' actions. You should never really find yourself in a situation where everyone watches the GM roll to see what the NPC achieved — that is, unless the player is testing against that result. (OK, and Feints).

You see this concept at work in the Hirelings (Porters, Guards, Guides) and Followers (5th level abilities for some classes). They just don't make their own rolls! At best they provide a helping die to a player making a roll. Even the special NPCs who get their very own point of disposition still never take actions on their own; they just add helping dice until they're knocked out!

It's not explicit in the rulebook that this is a hard-and-fast rule for all types of NPCs, but the game does work best if the players are never just spectators. If they can't affect the outcome of a roll with their own traits, wises, and rewards, then chances are the GM will be better off just making a decision on the outcome or rolling a "die of fate" (from Burning Wheel) if it's that uncertain. We'll cover this a bit more when we talk about Services, below.

The first stop in statting an NPC of any kind is the Peoples section (TB1, p159) of the Denizens chapter in the Torchbearer rulebook. There's a load of really great stuff in this section, and you can usually find some simple stats to use on the fly.

You can and should tweak the Might or Nature Descriptors of these stat blocks to get the NPC you want. Let's say you need an Elven Warrior on the quick. The other elves — bard, sage, etc. — aren't quite militant enough. Take the Soldier statblock and add the "First Born" trait. If it's an adventurer rather than a rank-and-file eleven warrior, simply change its Might to 3.

Let's have a look at a few different roles that NPCs can play in a Torchbearer campaign, and what you actually need to decide about them. We'll use the following categories: Authorities, Enemies, Foes, Followers, Friends and Parents, Hirelings, Mentors, and Services. 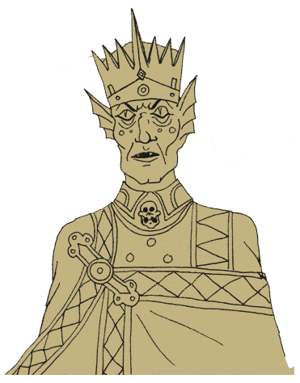 Scrappy bands of armed and dangerous freelancers are bound to run across the authorities at some point; maybe working for them, or against them, or both at the same time. From the Castellan of the Keep to the Bandit Queen, these NPCs may have been brought into the game through a twist, the enmity clause, or a successful Circles roll. But more often they're simply included in a module or the GM's game plan as quest-givers or foils.

Authorities need to be powerful enough to discourage shenanigans from the party. They didn't get where they are by accident, they have the raw power to back up their authority. This usually comes in the form of disposition-inflating goons, often Soldiers (p161) for official types, and Thugs (p162) for less reputable authorities like the head of the Thieves' Guild. (FUN FACT: A ton of hired muscle can certainly bolster your disposition in Convince conflicts, and it's pretty helpful against Thread of Friendship to boot!)

On top of that, authorities often benefit from a substantial character level (at least 6th), and have the use of the Boss Monster rule. If they would have spells, prayers, or an attendant magician or cleric, you should be familiar with the spells that they might cast on troublesome adventurers. Select them ahead of time if you have an over-developed sense of fairness.

For quest-giving authorities in particular, wealth is probably the single most interesting characteristic from the players' perspective. To properly illustrate their power, they ought to be able to offer substantial rewards (6D cash per player or more) or special perks normally unavailable to disreputable adventurer types (item storage, for example).

Adventurers are bound to make enemies in their line of work, but there's often one special enemy — a rival — who is a constant thorn in their side. This is the Enemy, with a capital E, who is born during the Circles questions in character creation (or else earned through a twist). The Enemy is one of the most powerful NPC types, owing to a number of special rules sprinkled throughout the book.

Beyond these special rules, you will want to keep stats equivalent to Foes, below, since it is highly likely the party will get into a conflict or versus test of some type with this character. 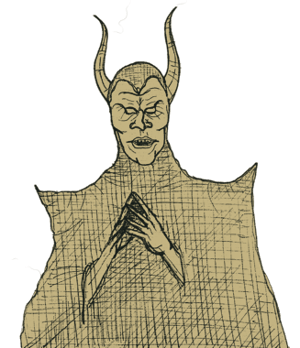 Of course, not every character at odds with the "heroes" is an Enemy outright. There are droves of evil clerics and scheming bastard nobles who may wish the party ill. Not all such foes should gain the considerable benefits of being a capital-E Enemy.

In practice, Foes are the most common type of NPC for whom stats will actually be necessary. Foes roll against the party and deserve every trait, wise, and nature descriptor available in order to provide a suitable (and flavorful) challenge.

Occasionally a player character will survive to the stately old age of 5th level. Many classes have an option to gain a Henchman, Cousin, Companion, or other special follower who accompanies the experienced adventurer. 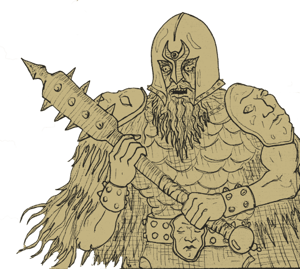 While Friends and Parents can sometimes get wrapped up in the action, they most commonly feature in town phases where they can offer their biggest, most obvious benefit — free accommodations. While you may end up creating a more full set of stats for a Friend or Parent if they feature directly in an adventure, in the beginning you really just need to know:

Porters, Guards, and Guides we will refer to collectively as "Hirelings". None of these NPCs will delve dungeons or other dangerous sites with the party, so their main purpose is to offer helping dice to the party on their particular speciality.

Guards will help in tests to defend the party's camp, mounts, and baggage. It's not explicitly stated in the rules, but you should probably assign a point of disposition to the guards in fights such as this.

Mentors are 5th level adventurers who will help — and most importantly teach — player characters. Like Friends, you will want to know where they reside and how nice their house is. You'll also want to know what kind of skills they can teach, and if the player character is a Magician or Elf, what spells they can teach as well. Picking a Magic School for the mentor may bestow a bit of personality on the selection process.

It's only a matter of time before a player asks to track down a service in the Town Phase — a healer to stitch them up, a smithy to patch their armor, or a carpenter to help build them a home.

Use the rules for "Searching for Someone" (p91) in the Town chapter — this is a +1 Lifestyle increase. Make a Circles test (p135) to find someone willing to help.

If there's anything dicey about the service, or it has a significant chance of failure, the GM should use a Die of Fate or simply determine the outcome. There's no real reason to roll an NPC's skill rating. If you want to account for the potential failure of something like a spell, prayer, or healing treatment, you can use a twist on the Circles test or Resources test to reflect that.

An Example of Services

Clevin the Paladin has an emotional attachment to his damaged Dwarven Plate armor. The GM has ruled that repairing Dwarven armor is an additional factor, and so Clevin's player feels this is beyond his meagre Armorer 3.

Clevin decides to seek out a Dwarven Armorsmith. The GM factors this as an Obstacle 5 Circles test — someone outside the life, level is irrelevant, and willing to help for a price. With help from the party and a Fate point, Clevin manages to track down Sceld the Smith.

Sceld is proud and demands an Ob 3 Resources test to make the repair. Spending 2D in cash (plus his Resources of 2), Clevin still only comes up with three successes. The GM invokes a twist — Sceld fails his 'test' and will need until next town phase to complete his repairs.

When it comes to statting NPCs, knowing what not to prepare can save you a lot of time. Focus on the flavor:  the things that will actually be announced during gameplay.

In Part I we discussed how skill and ability tests against obstacles are only a part of Torchbearer’s overall flow. A lot hangs on how the GM presents information to the players and the choices that...

Conflicts handle a variety of pivotal moments in Torchbearer: arguments, contests, and struggles of will, daring chases or escapes, and more. While the rulebook thoroughly explores “Fight”-style...