Learned scholars have long debated the process and efficacy of creating automata, artificial creatures capable of ambulation and decision making. Methods of both arcane and divine origin have been plumbed in the dark bowels of hidden laboratories, kept secret for the knowledge that they strike upon powers meant only for the Immortal Lords. Theft of those secrets is surely a crime against nature itself...

If in possession of a Tome of Golem Vita Ambulaticum or similar instructions, an arcanist or ritualist may reliably attempt the great work of giving life to the lifeless. The process requires a proper private lab and set of specialized tools. No mere guildhall will suffice for this blasphemous work. A wizard’s tower, a private chapel, or sufficiently modified private residence is required. Virgin materials, refined ingredients, and articulated instruments are also required tools. These requirements often have very high costs or necessitate specialized expeditions to acquire.

Factors for Creation of Golems or Automata

Instilling life in your creation requires a sacrifice of the soul. Sacrificing your bodily fluid to instill life reduces both the current rating and max of your Health and Nature by 1. Using Ascetic prayers to provide a sacrifice reduces both the current and max rating of your Will and Nature by 1. Harnessing the forces of nature leaves your vitals intact but still reduces your current and max Nature by 1. If ever your creation is destroyed, your Health or Will max is restored, but never your Nature. These sacrifices only take if the creature is brought to life (see Twists below).

Your creation has a directive, chosen by you, that is its instinct. “Protect my master” is most often chosen by wizened occultists who seek a companion to keep them safe. “Protect those of the faith” is what a ritualist might choose when seeking a divine champion to guard a temple. Unlike those born of nature, automata do not act outside of their instinct unless commanded to do so by their master. In contrast, flawed creations will act outside of their instinct as is their prerogative.

Bring Your Creation to Life (Arcanist or Ritualist)

Selected Nature: Nature 1 creations cannot speak, but can understand simple commands. The maximum Nature you can instill in your creation is equal to your Will. Your creation has the Nature Descriptor Serving my Master. Choose two additional appropriate descriptors.

Installed fail-safe: By speaking this word or performing this simple action, your creation ceases its actions immediately and can then be destroyed.

Weapons: golems and automata are never treated as unarmed in martial conflicts. Add one factor for additional every weapon your creation can equip in a conflict.

The Obstacle to creating artificial life is steep, and failure is a likely result. Failure can often tax one’s current Nature, as the sacrifice provided is rejected by the Gods or otherwise deemed unsuitable. Even when it seems that life fills the body of the creation, it might be twisted by fate. Some creations take more of their fair share of their creator’s essence or only take the vices of their nature and none of the virtues. Other instances might find the creator’s sacrifice attracts an unclean spirit who inhabits the creature choosing its own Nature descriptors. Whatever the complications, flawed creations are hard to control and typically have higher natures than their creator intended. They never accept a Serving my Master descriptor and sets their own instinct.

Conditions for Golems and Automata

Golems and automata are generally immune to conditions that relate to the visceral workings of life, such as Hungry/Thirsty or Sick.  As approximations of life, they do not usually require food or rest in the same way that normal creatures do. Rather, they follow their directives until the damage of misuse and time inflict injury or worse. Since the vital spirit instilled by sacrifice only animates them, these creatures do not heal wounds naturally. However, at the GM’s discretion, these alternative conditions may be used.

Misaligned: replaces Hungry/Thirsty. This represents minor wear and tear on the body of the creation. Oils and unguents may be used to alleviate this condition. An Alchemist test can be used to prepare such treatments.

Broken: replaces Injured. The body of the creation is damaged such that it impedes its function. A Weaver or Armorer test Ob 4 is required to restore the creature to full working order.

Haywire: replaces Sick. The vital spirit of the creation is afflicted with contravening forces, often related to the sacrifice that brought it to life. An Arcanist or Ritualist test Ob 4 must be performed to drain these forces and set right the balance.

When constructed by a player, automata function as henchmen, adding help when their Nature applies.

When used as a monster by the GM, determine who created the creature and apply stats, weapons, and special abilities as you deem fit.

Because of their single-mindedness, automata are nearly as hard to Drive-off as they are to Kill. Use their listed Kill Conflict disposition for Drive Off Conflicts. If driven off, automata return to following their directive and become a Wandering Monster that may surface more quickly than other creatures. Even when dispatched or killed, it can be hard to tell whether they have in fact been destroyed or merely damaged such that they appear to be dead. As part of the Concessions of a Kill conflict in which the players won against an automaton, the GM can offer to turn the Kill conflict into a Drive-off conflict after the fact and take death off the table for both sides. If they refuse to believe that the automata has died and seek to make sure, the automata flashes back to life and gets a chance to finish what was started. Inform the players that their actions might result in impending doom.

Protector of the Faithful

Some priests of the Immortal Lords are unable to protect their faithful against the privations of the despotic. In despair, they choose to risk their souls for a divine protector who will punish those who harm the weak. 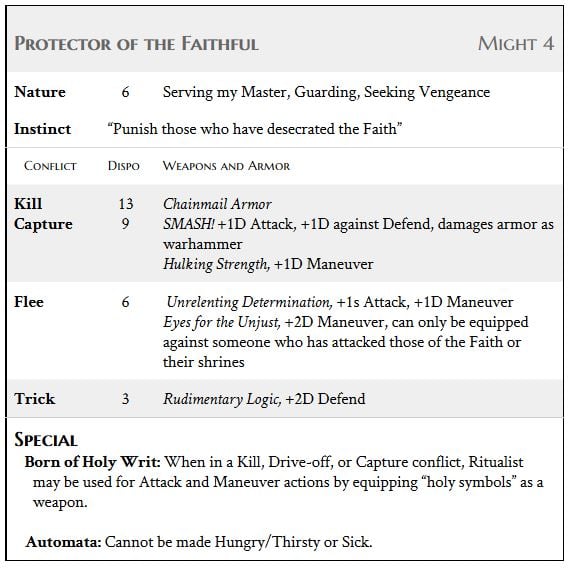 A work of miscreant science whose purpose is to follow the unfathomable orders of its master, these automata are designed to kill in the most efficient way possible. They appear almost human, but upon thorough investigation their intricate design becomes apparent. Crafted by some inhuman intelligence, a Futurist Nightmare can’t be reasoned with and won’t ever, ever stop. 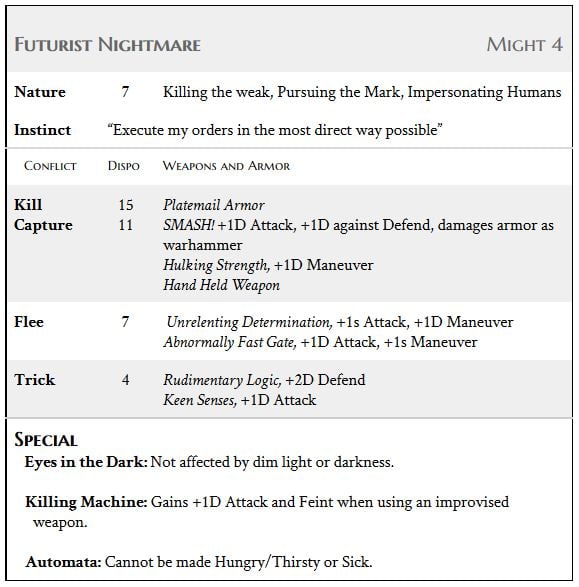 Most of the adventures I run in Torchbearer, both at home and at conventions, are drawn from one or two page adventures by a variety of authors. I’ve found that using small adventure locations helps...

Today, we are launching our Character Sheet Repo with the sheets for Beren levels 1 - 5.