The Vagrant's Guide to Surviving the Wild contains lots of new gear, monsters, and animals for wilderness adventures. But, the heart of the book revolves around a new custom conflict type called an expedition.

An expedition conflict has a few special rules but plays out similar to a fight conflict. Like any conflict in Torchbearer, the PC's actions trigger it, but, beyond that, an expedition should represent days or weeks of travel as a general rule of thumb.

If your group is playing with a world map, the players pick the route to the destination, which determines the territory types. The GM assigns disposition to the entire expedition (distributed to each respective territory) and then picks "threats."

But, before we get into expeditions, let's look at a few of the other ways to handle overland travel.

Maps, No Tests, and Good Ideas

If the party has a map between towns, they can fast travel to their destination. It is very wise to have good maps; however, there may be times when a GM knows that the road to a town is clear for the moment and will not call for a test. Yet, other times, a GM may allow the group to travel to a location because they used some knowledge treasure as a "good idea." A GM might also call for a test in town to hire sailors, to be hired as guards for a merchant caravan, or to purchase passage or a guide. In all of these instances, nothing is obstructing the group along the road or through the wilderness.

In Vagrant's Guide, we wanted to focus on the cinematic moments when there is adventure awaiting beyond the safety of the city walls. Once you cross the threshold beyond civilization, you walk into the domain of spirits, and monsters, and all sorts of danger. These trials and tribulations are the makings of an expedition!

Willow (1988), directed by Ron Howard, has lots and lots of traveling.

In this particular scene, after rescuing Madmartigan, the group breaks camp to continue on their destination to the Island of Fin Raziel located two days away. The Lake of Fin Raziel is a lake formed by the River Freen in a mountainous area of the Nelwyn Valley.

Expedition conflicts are best for one week or more of travel. You can run expedition conflicts for shorter journeys, but the GM will have to adjust the disposition appropriately. The trail to the lake is well-worn, and Madmartigan seems to have some familiarity with these lands. So, this type of travel is best handled with a simple Pathfinder test.

The party fails the test to reach the lake directly, and, in an unforeseen twist, a waterfall now blocks the path along the way. 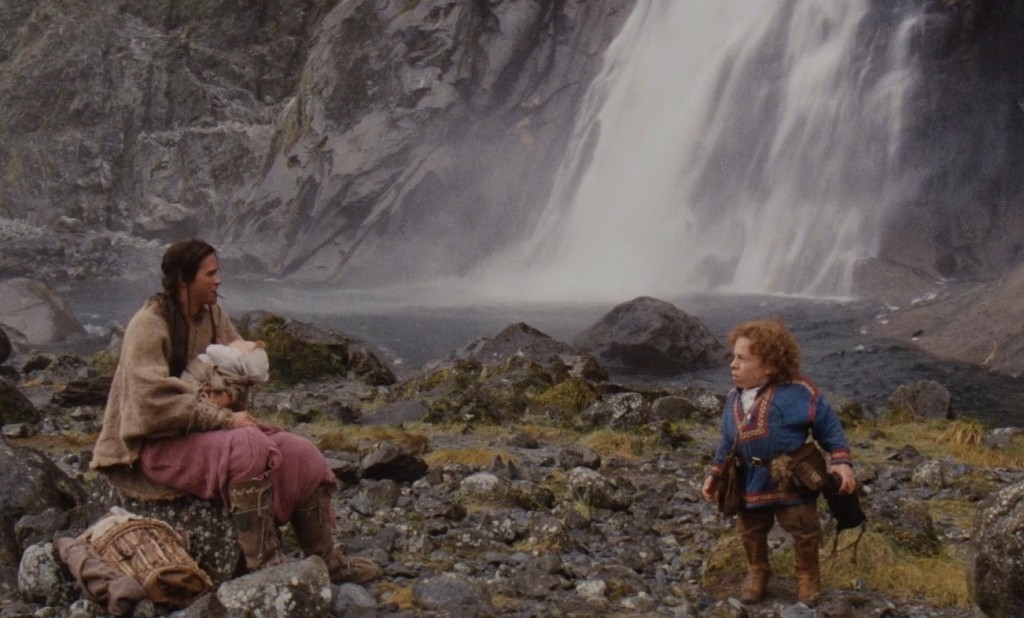 The group decides to scavenge the area and finds some blackroot before heading out. Willow and Madmartigen argue over whether the baby can eat it, and they have a little bit of banter.

To pass this area, instead of another Pathfinder test, you can use Dungeoneer to climb up the cliff to finish the rest of the journey to the lake.

The next approach to the wilderness is simply to treat it as an outdoor adventure. Instead of rooms in a dungeon, there are meaningful areas like the clearing atop the hill or the apple grove in the forest. Everything runs the same, but it happens above ground.

All of a GM's tricks of the trade apply, but you'll need to pay more attention to applying pressure in different ways and containing geographical areas with features like an impassable wall of thorns or a sheer cliff. Swamps and forests can feel just as claustrophobic as a mine or cave tunnel, and so it all works just fine for Torchbearer's systems.

In Legend (1985), directed by Ridley Scott, our forest-dwelling protagonist Jack has to get to the castle to stop some goblins and a demon named Darkness. Outside of the castle, the group must traverse a dangerous swamp. The party can explore the swamp in the adventure phase going from area to area. 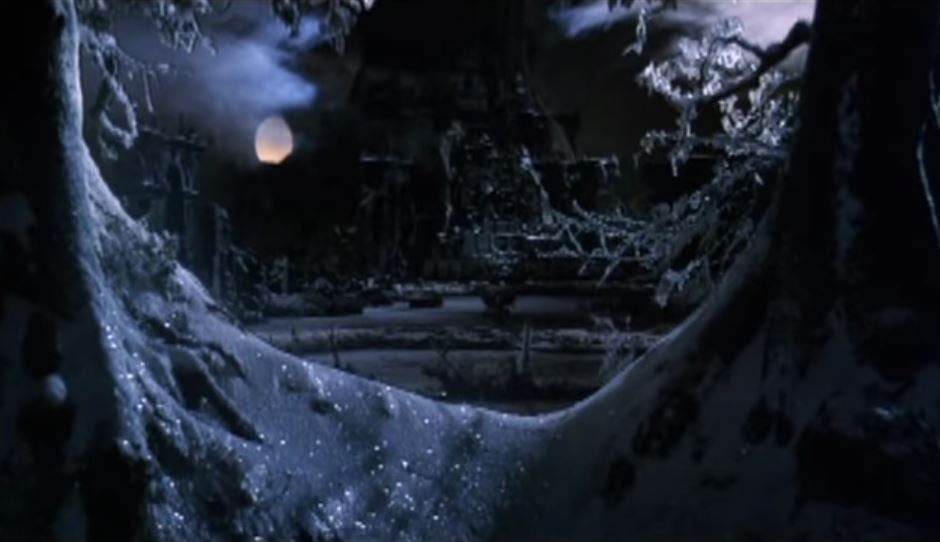 The swamp is just another area on the map and one small part of the larger adventure. The hag is the obstacle that blocks passage to the castle. If this were an expedition conflict, you could play the hag as the first threat in the swamp territory, but otherwise, there would be no guarantee that the monster would come up.

In Vagrant's Guide, there are rules for nighttime threats in an expedition conflict. Bring extra torches! 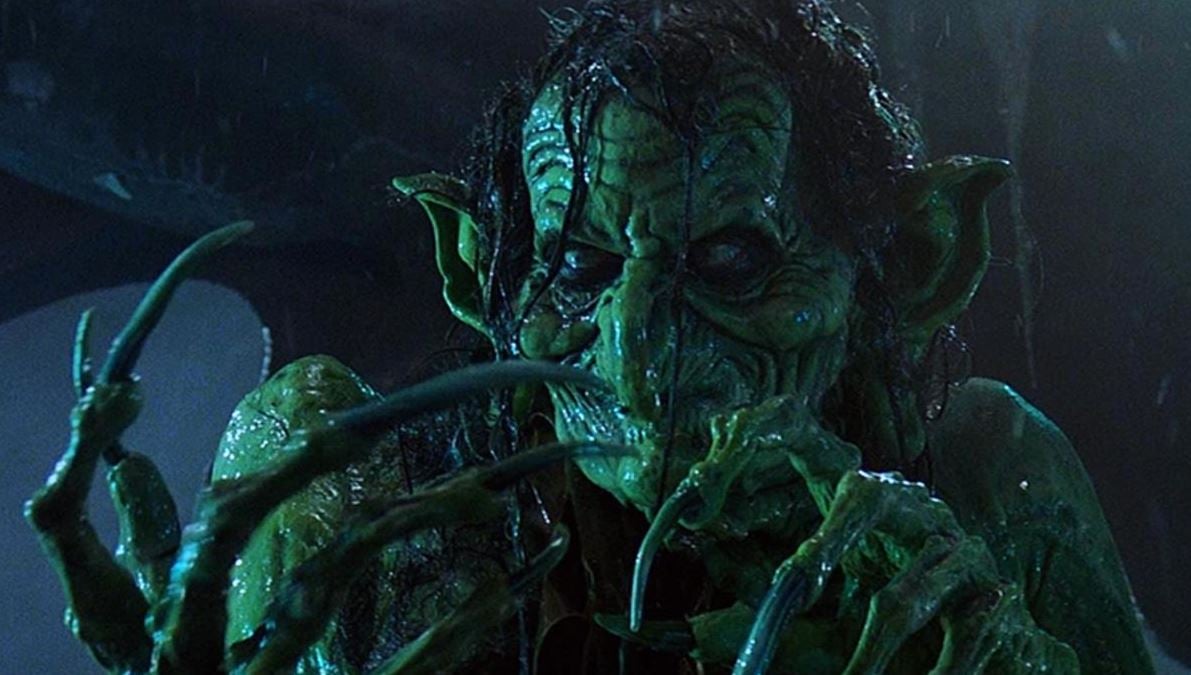 The hag Meg Mucklebones presents the party with a situation that can be handled through a conflict or tests.

Jack wins a trick conflict that leaves the hag distracted. Then, he finishes her off by taxing his nature for an epic fighter vs. hag Nature Ob 5 test while she is preoccupied.

The Vagrant's Guide also has a wealth of mounts and carts. A common question we get about mounts is, "Can horses die?" Well, yes, they can, but it doesn't happen that often.

Horses can become lame through a compromise, but otherwise, the horse does not test or make rolls. Of course, if the rider dies in a kill conflict, so too goes the mount, but otherwise, it seems unlikely your horse would perish. However, there is a special rule called Spurring the Mount, which allows a rider to pass down conditions to the mount, and that can endanger your steed.

A good illustration of dealing with the death of a mount is The NeverEnding Story (1984), directed by Wolfgang Petersen. Our protagonist Atreyu is going through an expedition conflict to reach the turtle spirit Morla the Ancient One. Atreyu hits the Swamp of Sadness, which is a special expedition rule called a Stronghold. Strongholds are areas of fortification or intensity within the territory at large. Strongholds provide helping dice to a territory to pump up the challenge. Here, the swamp territory is victorious but with compromise. The swamp makes Atreyu sick, but he passes the condition to the mount instead because he cannot afford to take such a severe condition at such a vital time.

When losing an expedition conflict, you reach an Impasse. The impasse is the threat that you were facing in the conflict. Now, you must deal with that hazard before continuing.

Now back in the adventure phase, the Swamp of Sadness is a trap, and Atreyu ignores the warnings. He wades right into the inky grip of the trigger. Now, Atreyu must make a Will test, and he fails. Once again he faces the Sick condition. This is a painful moment, but it would be tough for Atreyu to make the tests to recover or treat sickness. He still can't afford to become sick at this point in the game. 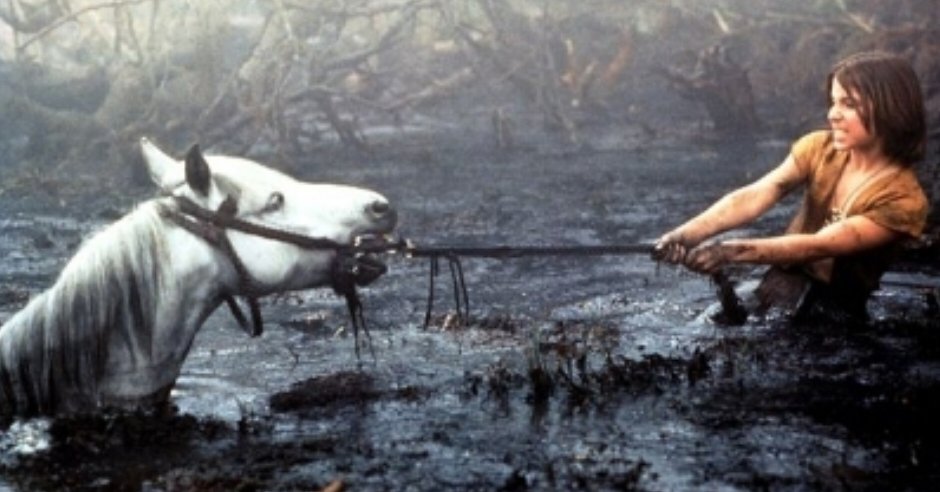 For a second time, Atreyu passes down the sick condition to poor Artax, who succumbs to the misery and grief of the swamp. Without the horse, Atreyu's story would have most certainly ended.

If ever there was fodder for an epic expedition, it would be Mononoke-hime (1997), directed by Hayao Miyazaki.

During Japan's Ashitaga period, the last Emishi prince, Ashitaka, leaves his hidden village in search of a cure for a corrupting curse.

While in his home town, Ashitaka plans a route through 3 days in the Misty Mountains, 4 days in the Trackless Steppe, and 3 days in the Feudal Countryside to reach the next town.

Since Ashitaka has never been so far outside his home, the GM determines this would make for an excellent expedition. This journey spans multiple days, but more importantly, provides an opportunity for world-building and adventure between town and destination.

The GM asks a few questions to confirm the players' goal and then alerts the players that an expedition conflict has been triggered.

In the rulebook, there are two ways to start an expedition: from a town or camp. The benefit of leaving from a town is that the party can provision. Ashitaka prepares some food as "reserves" for his voyage.

The party generates disposition by rolling Steward (in the town market) or Scavenger with factors (if in the wild). Adds successes to base Health. The other party members can help. 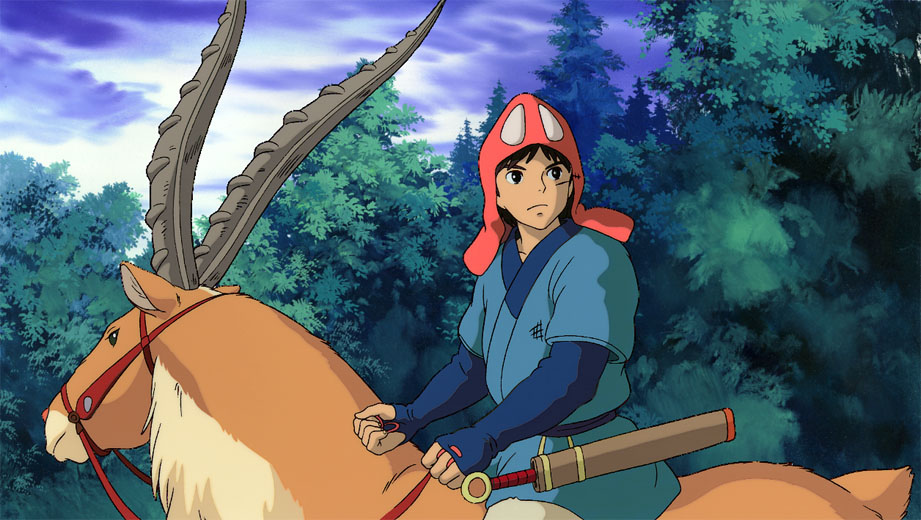 As he leaves his village, Ashitaka travels through the various territories on his loyal red elk Yakul (Yakkuru). 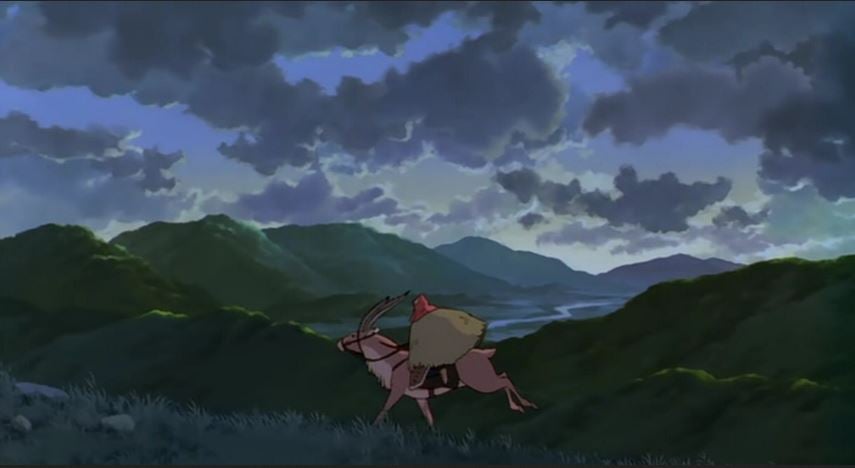 Each territory has its own list of threats. The GM can use the threats as-is or as a template to modify. There's over 200 various threats in the book, and they are ready to use. The GM plays one threat per round.

For the Misty Mountain territory threats, the GM selects:

During the conflict, Ashitaka loses some disposition from the Only One Way Down threat, but he uses food from the reserves. Reserves act like a helmet in a fight, absorbing -1 HP once. Like armor in a fight conflict, reserves are disposition insurance. As a part of the special ability for this threat, Ashitaka needs to Attack with Dungeoneer to continue.

Ashitaka reaches the next territory and leaves those threats behind.

Again, the player doesn't know the threats until the GM declares it at the top of the round.

Ashitaka gets a lucky roll and passes right through the steppe and does enough disposition damage to the territory to get half way into the Feudal Countryside. Ashitaka is almost at his destination, but there is one last threat to face... 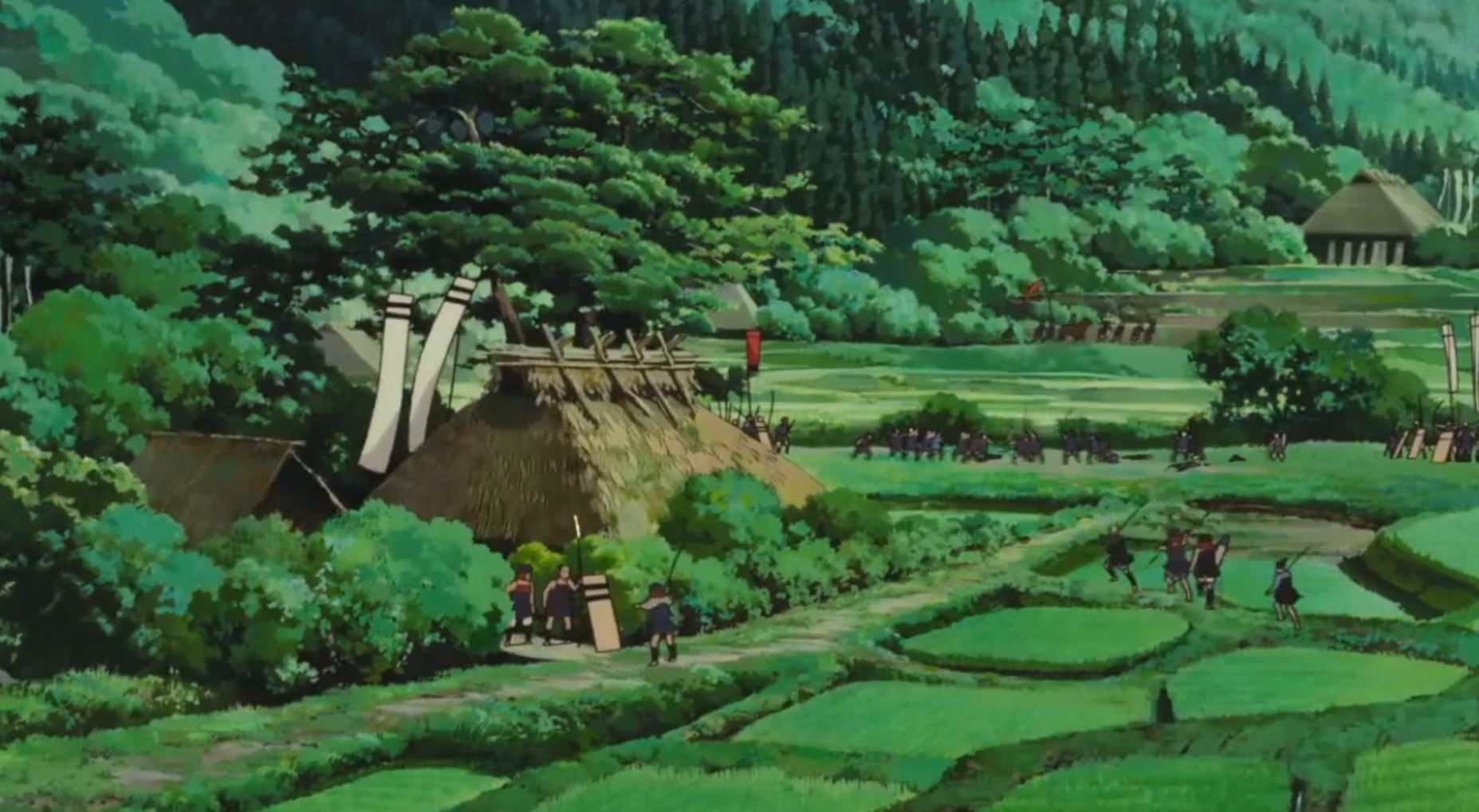 Among the rice fields, Ashitaka comes upon the Highway Robber folk threat. Bandits massacre the villagers.

At any time, the party can leave the expedition and jump back out to adventure phase. Mechanically, it is similar to the Surrender rules (Torchbearer, p.75) where the territory wins without compromise. Essentially, the party goes as far through the territory as they have done damage to the expedition. If the party wanted to to rescue the villagers, join the robbers, or go plundering in a moment of opportunism, they could lose the conflict. Since Ashitaka has not lost any hit points, he would not reach his destination but would have to deal with the impasse: the bandit raid.

As an impasse, the obstacle needs to be surmountable but also intimidating. This battle would certainly be that case.

However, Ashitaka is not interested in playing the hero. He does not leave the expedition because it would be almost certain death.

In an expedition, the player actions map to these suggested meanings:

"Let me pass!" he pleads to the mocking raiders. He warns them, but they just will not listen. The next round of the conflict continues. Ashitaka plays a risky feint action and succeeds with a devastating action. He takes a different route around the town, clears the threat, and heads out the area. His expedition has come to an end, and he reaches the town.

The beauty of the expedition is that in a single conflict, there was world-building, suspenseful scenes of drama, chances for other adventures, and even a battle all rolled up into one dynamic encounter.

This is just a small taste of some of the rules, conflict threats, and gear in the 140+ pages Mordite Press has been working on. There's just one week left to get in on the Kickstarter for The Vagrant's Guide to Surviving the Wild.

As always, thank you for your support, and I hope to see you in the wilds!

All copyrights belong to their respective owners. Used under Fair Use.

Adventurers in Torchbearer often find themselves in situations out of their control or beyond their capabilities. In those moments, when all else has failed, there is usually nothing left to do but...