As the Torchbearer rulebook helpfully explains, the magician is the most complicated class in the game. A close reading and mastery of the spell rules is necessary to get the most out of playing a magician. Even after dozens of extended discussions parsing the rules, we at Mordite Press still manage to have disagreements. Hence our mission on today’s Mordite Monday: the spellbook rules explained!

A magician begins play knowing three spells, and all three are inscribed into a traveling spellbook. They can memorize and cast one spell before they need to rest and re-memorize. This seems simple enough, but there is already a lot going on here:

Think of the magician as a virtuoso concert musician. They have studied many pieces of music in depth (known/library), but they are only fully practiced at specific pieces they have been working on recently (memorized spells). Their training and development has limited the size of their repertoire (mental inventory). They may bring sheet music with them to remind them of the nuances of a piece in order to practice it and keep it memorized (traveling spellbook). And of course, playing even a single wrong note could consume them in a mystical conflagration of elemental energies beyond the mortal ken. Bravo!

To Know is to Learn

When casting a spell, the first requirement is that the spell has been learned. Learning a spell requires a Lore Master test against an obstacle given in the spell's description. It may seem like it goes without saying, but a "learned" spell is "known" as far as the rules are concerned.

Even if you lose your traveling spellbook and cannot access your library, you still know whatever spells you have learned. You won't be able to memorize them without your spellbook or library, but you do understand them and remember how they work. 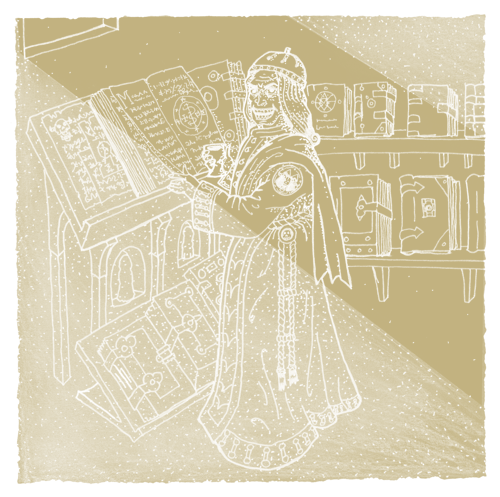 The moment you learn a new spell, it is effectively added to your library. The next time you return to your library you simply dump your traveling notes into your collection, and it's there. In effect, there is no difference between the list of spells that you know and the spells contained in your library.

This item receives an impressive amount of space on the basic Torchbearer character sheet, and so many players get the impression that it directly determines the spells they can cast. This is not entirely true. Let's take a moment to review what the traveling spellbook is not:

Replacing a lost Spellbook with a Library

If you have access to a library, you can replace your spellbook by buying a new, blank spellbook (or scraping clean the pages of an existing spellbook). It's an Ob 4 resources test to obtain such a book at the market. A steep price!

You still know the spells that were in your lost or destroyed spellbook. You just can't memorize them until you piece together the details to study. This will require a Scholar test equal to the highest Obstacle listed in the spell descriptions, plus one for each additional spell. Make this test and presto! — new spellbook.

If you don't have access to your library, you can still replace your spellbook but the method is less efficient. See the Scrolls section below for emergency spellbook replacement.

As 1st level magician can only cast a single spell before they must memorize another in the camp or town phase. This may not seem like much at first, but in Torchbearer spells are very powerful indeed. Even first circle spells are often capable of resolving difficult encounters or turning the tide in otherwise impossible ones.

When you memorize lightness of being, you may cast it exactly once before it disappears from your mental inventory. If you have two free mental inventory slots, you might memorize lightness of being twice, and cast it twice. This is because spells are ammunition. They are discrete, slippery, mystical objects that the magician must imprison in mind through careful practice. Envision your magician as a kind of demolitions specialist with a selection of charges crafted for a variety of situations.

This is certainly not how magic works in Harry Potter. This is its own magic system with a storied tradition in fantasy RPGs. Not everyone sees the appeal right away, but I urge you to give it a chance. After all, magic isn’t real (right?) and so this strange method is no more or less realistic than Hogwarts'.

The Legend of Jack Vance

Why is this all so complicated? Many veteran fantasy RPG players will know and appreciate that the system is a callback to the original Dungeons & Dragons magic system, sometimes called a “Vancian” system for its resemblance to the work of sci-fi author and Appendix N alumnus Jack Vance.

Vancian magic certainly has its drawbacks and has garnered a large number of detractors over the years. It works best in settings where magic is extremely potent but ephemeral, like Torchbearer. More skill-based magic systems tend to reduce the majesty of spells to simply flashier weapons in order to maintain "balance".

Burning Wheel's Magic Burner (reprinted partially in the Burning Wheel Codex) offers the best exploration of various magic systems that could work with Torchbearer if you are desperate to escape the Vancian tradition. But in this instance the old ways may be best for the nostalgic dungeon-crawl feel.

By scribing a scroll, you are able to store a spell in a physical object rather than your mental inventory. This is a very versatile technique that allows low-level magicians to cast many more spells than they would ordinarily be able.

It's highly noteworthy that a magician can scribe a scroll of any spell that they know. That spell need not be inscribed in their traveling spellbook. In fact, the process of scribing a scroll does not involving the traveling spellbook at all. When the GM attains the height of cruelty and destroys your traveling spellbook with a twist, you may simply smirk and begin stockpiling the checks you will need. Losing the spellbook is a mere inconvenience when you have mastered scrolls.

At some point in any magician's career, it is inevitable that your traveling spellbook will be lost or damaged. Or perhaps you're simply unhappy with the current selection of spells in the book, but returning to your library is not a viable option. Either way, you have hope!

At the cost of two checks (or Lifestyle +2 in town) and a blank spellbook (Ob 4 Resources) you can reproduce a spellbook from scratch containing any one of your known spells.

Next, scribe  a scroll of any known spell that you wish to have in the spellbook. This will cost 1 check or +1 Lifestyle.

Once you have a scroll, you may copy it into the traveling spellbook using the Scholar skill. This also costs 1 check or +1 Lifestyle. Remember you can't take two consecutive checks in camp, so you may need a third check to hand off to an ally if you want to get this all done in a single camp phase.

The scroll is then consumed, but you now have the spell inscribed into your spellbook!

Part of the confusion around spell management owes to the fact that the original Torchbearer character sheet — thing of beauty that it is — has no space for recording known spells, only spells scribed in the traveling spellbook. Subsequent versions of the spellcaster's character sheet on the official Torchbearer blog have much more space dedicated to managing the state of a character's library, spellbook and mental inventory.