Whether playing at a convention or firing up a one-shot adventure, there are times when you are looking for not only pre-generated characters but a pre-gen team.

In this Road to Redemption series, we've been exploring how to plan, strategize, and build an entire lean, mean adventuring team.

Today, we're going to look at planning level benefits for the Human Warrior and Dwarf Adventurer classes based upon our previous work using the Team Builder tool. We will start to plan out the 1st - 5th level characters for Karolina and Beren from the classic iconic characters in the core rulebook. We'll apply some of the party-building approaches from the first two parts in the series.

The two teams we've been working on:

Both parties are balanced builds. One team uses the classic characters, and the other employs a wild assortment of classes from third-party supplements and the Middarmark gazetteer for experienced and advanced players. In both groups, the main strategy of a balanced build is for each character to specialize in one role and to have someone in the party to cover all of the core skills.

In a later article, we'll post downloadable character sheets for these two parties for use at GenCon in August. We'll have a repository of sheets, and you can submit your variants of the sheets too.

The sheets will be arranged in groups for each team build with variants for three, four, and five-player teams.

Your group should already have a general plan from Part 2 regarding supplies, camp, and loot. For this party, they like to camp often—sometimes twice a session. So, it makes sense to have camp instincts. They also have a spellcaster, so the loot strategy informs how often they can go back to town to level up the mage and cleric to gain new spells and prayers.

These strategies are not set in stone, and they can change session to session. These strategies are nothing more than discussion starting points. However, as the game gets going and twists start raining down like dragonbreath, knowing who should take the fail for a particular skill becomes vital for higher-level skill advancement. I've seen a lot of skills with six successes and only one fail stuck without advancement because no one talked about the needed failures.

For this series, we are going to use published modules, and both parties will go through the same series so we can compare and contrast the results. As we level all the characters up to 10th level, we'll work in some of the other adventures that were left out.

The Dread Crypt of Skogenby

A good beginner adventure that is smaller in scope.

A classic adventure full of goblins, caves, and exploring.

Under the House of Three Squires

Comes later in the lineup because it is a little larger.

Hand of the Pit

A medium-sized dungeon that should provide a challenge for a group of seasoned adventurers.

Roost of the Condor Queen

Presents Otherworldly foes to deal with.

The Secret Vault of the Queen of Thieves

A versatile dungeon suitable for a party 3rd level or higher.

After completing these six adventures, the characters should reach 5th level. Then, we will continue their exploits in a later article for levels 6 - 10.

Each character will have a brief sentence or two background that describes what happened in the character's last adventure and the changes that shaped them.

We are using a modified version of the playtest rules for higher level characters.

The playtest rules create a new starting character, and they do a good job of balancing certain strengths and weaknesses by sacrificing Nature points. These rules work great for characters that drop into a campaign around 3rd level, but for higher-level characters, it doesn't quite yield the desired results.

The intent of these Road to Redemption character sheets is different than the playtest rules. The aim here is to have a character that represents having gone through all of the adventures and earned certain rewards. This is important because the adventures are designed for certain character level ranges.

So, instead, we had to modify the playtest rules slightly. I have gathered various character sheets and recorded advancement milestones and used the average from all of that data.

To get to 5th level, the characters are based on completing:

These averages are based on best-case scenarios. Some groups might take 15 sessions to get to the first Winter phase while others might have taken 3 Winters to get to 5th level. Also, in many Torchbearer games, characters die, tax out Nature, and all sorts of tragedy befalls our poor adventurers.

We use the same number of Advancement tests as the playtest rules. However, instead of reducing Nature to earn traits and wises, the characters will receive them after the appropriate Winter phase.

The main point here is that two Winter phases grant additional traits and wises, which are some of the most versatile components of a character.

Another thing worth noting is that once the 10th-level characters were introduced after the publishing of the rulebook, the reward requirements to level up were increased. If you play in Virtual Tabletop systems like Roll20 or Tabletop Simulator, the character sheets are wrong and don't reflect the updated values. For example, achieving 10th level requires 77 Fate and 32 Persona instead of 60 and 30. 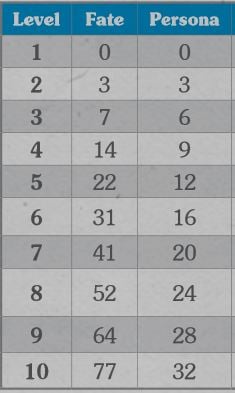 Level benefits are the special abilities, spells, or prayers specific to the class that a character gains after leveling up. Each class has some choice to make to pick one new benefit/spell/prayer. Unlike traditional RPGs where warriors gain the most hit points after leveling up, the benefits for a human warrior or dwarf adventurer in Torchbearer are relatively minor. The benefits are not as critical as for a ranger, mage, or cleric. The mage is starved for spells, and the cleric is in want of prayers for those first few levels. Leveling up your spellcaster is usually a priority, but typically your warrior can wait to advance.

Because the warrior and the adventurer share some level benefits and also overlap in the fighter role, it can help for the players to strategize advancement. Do you really want two characters with the Stubborn ability? When that happens, this part of the level benefit kicks in:

If the party chooses the Karolina to be the "tank" of the party, it would make sense for her to take the Stubborn ability. Again, it all depends on your plan for the party.

The players discuss prioritizing plate armor for Karolina. So, she plans to take Armored and Stubborn as her first two choices.

At 4th level, Endurance should be handy, and at 5th level, having a henchman follower makes things interesting.

Beren does not have the Haggler skill, so the 2nd-level benefit Shrewd would not be so helpful. This is one of those group decisions that would be good to discuss when building out the team. When is a good time to Haggle? Is the party going to haggle at all?

The party does not plan to haggle very much. Haggling is a gamble, and, like any bet, is always in the "house's" favor. It is a risk because there is a lifestyle cost and there is a good chance things will actually get worse instead of better. They discuss making Gerald the primary haggler for the group, meaning if they get a big item, they will give it to the halfling to see if he can get the "Rare specimen" bonus to double the cash in value. At 2nd level, Gerald will increase his Haggler skill to 3, and he can get help from all four of his teammates to help with success.

So, Beren passes on Shrewd to take Armored. Having duplicate Armored benefits works out well for the two heavily armored fighters in the group.

For 3rd level, Beren plans to take Miner instead of Stubborn so that Karolina can be the tank. The party plans to purchase plate armor for Karolina by the time she reaches third level to make the most of her Stubborn benefit. They mark that on their loot strategy.

For 4th level, Beren plans for Greed to get that free turn or check. This party needs tons of checks to fuel those camp instincts, so Greed will fit in with that strategy nicely.

Beren is the "armorer" in the group, so he plans to take Tinker for 5th level.

Now, we have a good plan to guide advancement and level benefits for the warrior and adventurer. You can apply the same approach to the spellcasters or any classes that have overlap.

Next month, we'll demo our character sheet repo and demonstrate how all of these strategies and plans come to fruition during the game at the table.

Iconic characters, names, and likeness used with permission of the authors. All copyrights belong to their respective owners.

I greet you, Legion of Chaons, and welcome back to Mordite Monday! This week I'm turning over command to D. Koch, author of Fearless and Freebooting and all-around classy guy. His formidable mission...