In Part I we discussed how skill and ability tests against obstacles are only a part of Torchbearer’s overall flow. A lot hangs on how the GM presents information to the players and the choices that those players make long before the dice and obstacles come into play.

If everything goes as planned, before long your players will try something that is risky and dramatic enough to warrant a test. What then? Today we’re going to discuss obstacles — and what the ideal obstacle is for a given party size. 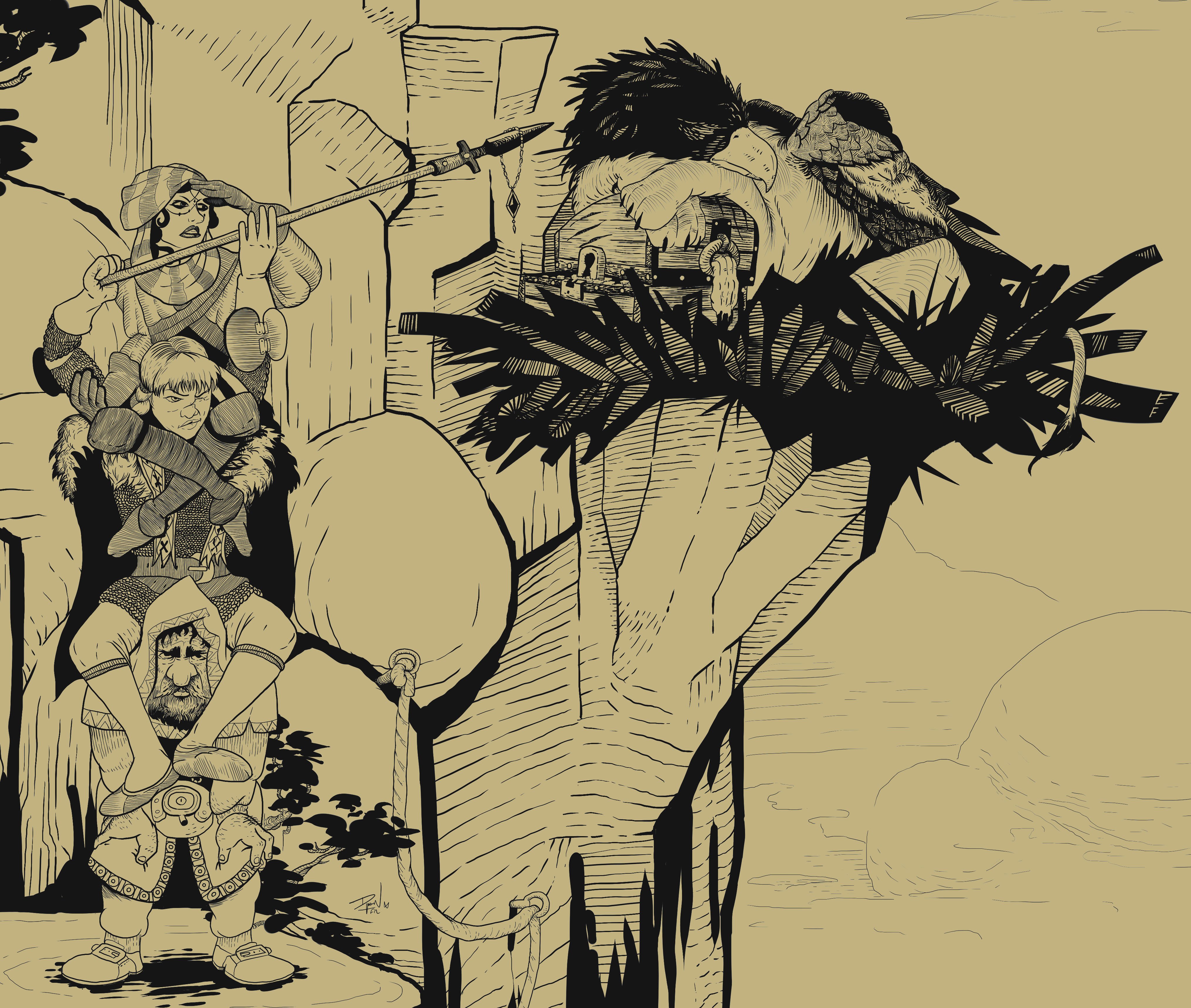 Factors by the Book

In most situations, you will want to use the Ability & Skill Factors chapter on page 132 of the rulebook to simply look up the factors under the appropriate skill. Once you’re familiar with the way Torchbearer assigns certain actions to specific skills, you won’t generally want to plan out your obstacles in advance. In fact, some skills (such as Dungeoneer) have factors that really can’t be planned out in advance without knowing the exact intention of the party (for example, how many people are traversing the underwater passage).

It's still a good idea to look at the obvious challenges in your adventure and familiarize yourself with the factors involved. But in practice, you shouldn't commit yourself to these as the only possible tests. Players will surprise you and come up with awesome ways to use their skills and gear to get by. You must be ready to improvise.

Factoring — the process of calculating the obstacle — is a simple and elegant process covered at length in that chapter. Sometimes the factors will seem punitive to the point of impossibility. “Is hauling a painting with laborer really Ob 7?”

There are many things to bear in mind about seemingly punitive obstacles, and they reveal a great deal about the deeper nature of Torchbearer:

For all of those good reasons, some obstacles are going to be really hard. Other than trial and error, is there some way we can gauge the relative difficulty of obstacles to ensure that the party isn't facing down one impossible obstacle after another? Or worse, what if the party is facing down a gauntlet of trivial obstacles?

It can be a helpful point of reference for both new and experienced GMs as well as module writers to have a specific “Goldilocks” obstacle in mind — the obstacle where your party will pass or fail, on average, an equal amount. In many traditional fantasy RPGs this “even chance” actually represents a risky challenge level, because failing a roll comes with no benefits. In Torchbearer, making the odds roughly even is a great way to keep the game engaging and fuel skill advancement, checks, and a few other important systems.

The purpose of an ideal obstacle is to prepare GMs to evaluate obstacles and give them a sense of whether greater (or lesser) challenge may be appropriate. If you have a large party, the Goldilocks Ob can help you determine where you may want to crank up the challenge a bit by putting out the lights or adding Evil GM Factors. If you're a module writer it gives you a baseline for determining party size appropriate to your encounter site, and can even be used in reverse as a sort of “factor budget” for the module.

And finally, a disclaimer: these guidelines should never be considered a restriction on the GM. That way lies madness.

Perhaps the most important consideration for determining appropriate challenges is the number of people in the party. Especially for common skills that are likely to be practiced by more than one party member, the number of people participating in a roll has a drastic influence on the difficulty.

This table has three difficulty ratings which roughly correspond to the advice given in “Problems and Obstacles” on page 124 of the Torchbearer Rulebook:

That "Difficult" line is your Goldilocks obstacle. If you stick to that obstacle, you will see passes and fails in roughly equal measure. You will need to adjust your expectations to account for skill rarity, pacing, and rewards. Let's have a look at how those things affect the ideal obstacle.

The most obvious influence on difficulty is the skill or raw ability rating of the testing character. This is covered in some depth on page 64 of the Torchbearer rulebook, but it is worth noting that the individual skill rating is far from the sole factor.

Helping dice and rewards can have an equal or even greater effect on the difficulty, but also the rarity of the skill being tested is something a GM must consider. Especially rare skills will often force the use of Faking It (Nature roll) or Beginner’s Luck on a roll. Very common skills will not only allow for more help, but players will often optimize matters by selecting the character with the highest skill (or the least conditions) to perform the roll.

Here’s a list of all of the skills ordered from most common to most rare amongst level 1 characters:

The later a skill appears in this list, the less likely that helping dice will be available to the rolling character. This list is only approximate, and certain parties will have overlap between their skills. For example, a party with two magicians and an elf will have lower ratings in the Fighter skill, but a much higher Arcanist than this list reflects. Furthermore, certain essential skills will likely have been learned by more experienced characters; Laborer especially.

UPDATE: The list did not account for how many helping skills are listed for a given skill. I've added a the number of help skills in parenthesis to help put that in perspective. Thus Dungeoneer and Armorer can be seen to be rare, but easily helped.

After the very first session, your players will have earned Persona and Fate for their characters. Persona especially can empower players to hit much higher obstacles than they would ordinarily. For this reason, it is wise to increase certain momentous obstacles by two or three for adventures intended to be played by experienced characters.

A “momentous obstacle” is an obstacle that should never feel trivial. If it relates directly to the heart of the plot or the players’ main objective, or is connected somehow to a player’s belief, then you should add an additional factor to the obstacle based on the nature of the character most likely to roll. This should keep the obstacle interesting and force players to tap their nature, use relevant wises, traits, and other abilities.

I recommend one momentous obstacle per expected Persona point available to the party during an adventure. If you are consistent in including these high obstacles it should keep the amount of available rewards under control over the course of the campaign.

Remember that variety makes for an interesting game. Once you know the ideal baseline obstacle for your party, you should still switch things up to include empowering encounters that are easily managed by the party and the occasional devastating encounter that should inspire fear. The advice given in “Problem Areas” on page 125 holds true. You can use the advice here to scale things up and down accordingly.

You must also account for where an obstacle will be encountered in the course of the game. Is it in the deepest corner of the dungeon, far from any safe camp? Is it near the entrance, where camp is reachable or Fresh dice might come into play? Conditions directly affect the difficulty of rolls, so if you're expecting the characters to have conditions by the time they reach a certain point, you'll need to adjust the ideal obstacle down a bit.

Enthusiastic players will occasionally undertake actions that ought to be virtually impossible. The GM should always feel empowered to deny such rolls from taking place at all. If you feel like entertaining the possibility of impossible things (and letting them needlessly tick up the grind), I recommend a basic obstacle of 12 for things you think should never, ever happen. Add one for each additional party member.

Let's say you've got a fairly large group of masochists who return week after week to play Torchbearer at your table — 6–7 players. (I can feel some of you bristling at that already, but trust me, the game can work quite well with those numbers).

You've got a number of different challenges you know you'll be including, but given the number of players you want to make sure it's a proper challenge.

Looking at the helping dice table, you can see that your baseline Goldilocks obstacle should be 4 for six players and 5 if that seventh player shows up this week. That's a great number for your dungeon's basic encounters. You could include a Dungeoneer Ob that will require them all to ascend a vertical pitch (Ob 5), and know that the players have an even chance of success. Of course, you'd include that anyway, but now you'd know that with only three players you should expect them to fail the roll.

For a rarer skill like Laborer, you might tune the difficulty down by a point or two — tapestries (Ob 3) and statues (Ob 4) would make good Goldilocks Ob treasure to haul out for a party of this size. Again, that doesn't mean you'd be wrong or cruel to include a piano (Ob 5) or even a throne (Ob 9)! But when you include those, know that you're offering a challenge where they are more likely to fail than pass. You want to vary things up quite a bit, but it is good to be aware of the relative difficulty.

You know your party, and you know the story you want to tell, so account for that. Let's say you have a group containing two paladins, a cleric, and an assassin. You know you want the big showdown in the dungeon to involve a tough Ritualist roll, but for this party how tough is tough?

In this party, everyone has the Ritualist skill, so you can ignore the rarity of Ritualist. Since it's a party of four, your minimum "Challenging" Ob is 4+. This is the very definition of a momentous test, so you should go ahead and add two for a total obstacle of 6. This tells us that for this party, Ob 6 is not inappropriate for a roll that the party will need to coordinate and spend rewards to pass.  Since this is occurring at the very end of the dungeon layout in the most dangerous area, you might expect the players to have some conditions as well. In that case, you might want to adjust the Ob down to 5.

Next time: Monsters and Conflicts

So what about versus tests like Scout or Manipulator? And what about conflicts? How do you gauge the relative strength of those encounters and make sure things are as tough as you want them to be? Stay tuned for next week's Mordite Monday and we'll break it down together!

In Part II, we discussed Obstacles and how to evaluate what obstacles were challenging for a given party. Today we're going to look at versus tests and monsters, and how to gauge just how dangerous a...

Previously in the Master's Manual we have explored how to balance a session, how to estimate the difficulty of obstacles, how to gauge the relative power of monsters, and how to make sense of unusual...