In Torchbearer— as in B/X Dungeons & Dragons— magic spells are highly self-contained things. They give you all the rules you need to use them, and they only very rarely note how they might interact with other spells. This is a cool, old-school approach to magic and keeps things lightweight and usable.

But inevitably over time a GM and players will find a use for general categories of magic. These are traditionally handled by so-called "magic schools" and they can be really helpful in a few ways:

...and of course, my personal favorite:

For today's Mordite Monday we shall invent new schools of magic for use in Torchbearer! 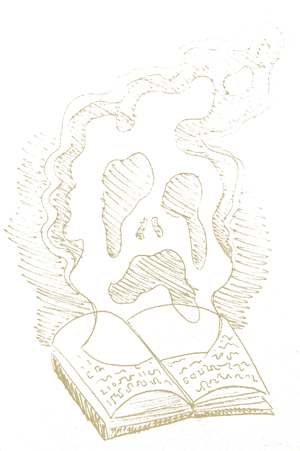 Schools first appeared in AD&D to allow specialized magicians and generalized rules about certain types of magic. The eight schools (and the universalist school) changed names and swapped some spells over the various editions, but they remain a really solid, useful game concept that we can adopt in Torchbearer.

However, there was a lot of overlap between the classic D&D schools. That could be a real sticking point for specialist mages or any players who hadn't memorized the exceptions. The nine new schools given here for Torchbearer try to make it as clear as possible what spell belongs to what school.

Each school has the following characteristics:

Aura: A color to be used for describing divinations like Supernal Vision.

Province: The concepts governed primarily by the school.

Noted Spells: A list of spells thought to belong to the school. The source of the spells is noted in parenthesis.

Apotheosis: A 5th Circle spell that reflects the pinnacle of the school.

Apotheosis: Temporal Bubble - Suspends the grind for a small group.

Apotheosis: Cant of Translocation - Allows teleportation as far as the horizon.

Apotheosis: Puppet Mastery - The caster assumes bodily control of a victim for a time.

Apotheosis: Force of Will - A mastery of force which can ward areas or fling enemies off into the sky.

Apotheosis: World Rift - a gate between realities summons a powerful angel or demon.

At character creation or upon attaining a new mentor you may choose one school as your specialty school. Choose a second school to represent your opposition school. You may only specialize in a single school.

The spells of apotheosis named above are merely tantalizing hints. They are rare and closely guarded by arch-magi. They shall be revealed in due time, but I will not leave you empty handed. Behold, the apotheosis of the school of Synthesis, the devastating Falling Stars:

With a word, the archmage calls down the planets of the heavens to obliterate the strongholds of her enemies.

The magician creates a swarm of meteorites which plummet down from on high to obliterate a room or series of rooms they have seen. Once cast, there is a brief delay as the stones fall; they may, in fact, be visible to anyone under open sky. Scrambling to safety requires an individual Health test with a factor determined by the GM based on the layout of the doomed area. If a conflict breaks out after casting but before the impact, the impact occurs at the end of the third round.

Any mortal creature caught in the impacted area is slain, regardless of previous condition. Any treasure in the area is utterly destroyed. The room is devastated and may be removed from the map if structural considerations warrant it.

The archmage may use a portion of her power to protect one or more individuals in the area. Use the Protection factors to increase the casting obstacle for each ward. The caster must be first among the warded; they must remain nearby to provide protection.