Seven New Cleric Prayers for all alignments in the Torchbearer RPG

I just finished editing some awesome upcoming Magician and Elf spells for our Kickstarter-funded, Zine Quest, Mordite Press presents: The Grind, a Torchbearer Zine. But what about the humble (or not-so-humble) Cleric? Surely I would not abandon the best class in the game! Clerics, your prayers are answered!

These prayers are in addition to those offered in the Torchbearer rulebook and the playtest prayers PDF.

Obeisance to the Black Goat

The Immortal Lords of Law and Chaos both revile the undead, but the Black Goat schemes to corrupt the souls of the living as well as the dead. To this end, His Wretchedness will enlist depraved mortal clerics to aid Him. Those who accept His allegiance are pariahs even amongst the priests of chaos. For this sacrifice, they gain the power to rebuke the mindless undead.

This is a Special prayer that is not forgotten when invoked.

Obeisance to the Black Goat Obstacle

Before any conflict, the cleric must pass a Ritualist Ob equal to the Might of the creature. Add one for each additional target.

Obeisance to the Black Goat Obstacle

Meeting the obstacle ensures the affected undead will not assail the cleric casting the spell. Mindless undead will not attack, and greater undead may choose their own course of action but are more likely to consider such a heretic to be a potential ally.

Each additional success past the obstacle will buy either protection for an additional character or convert the affected undead into a minion for a phase. Conversion requires successes equal to the Might of the undead converted.

Jagreen is a fifth level Cleric. Jagreen's party of three adventurers encounters a single ghoul, and he wishes to make it an ally. By intoning the Obeisance to the Black Goat, he tests ritualist and gets four successes. By meeting the obstacle, he has merely bought his own safety against the ghoul's aggression. With his additional success, he can obtain the safety of one ally. The ghoul could not be trusted to leave his other friend unmolested.

Jagreen decides to use a Persona point and the Deeper Understanding of his Undead-wise to gain 3 more successes, ultimately earning six successes in total. This is enough to turn the ghoul to his own nefarious ends.

Two sinister clerics may vie for control of a single undead creature. In this event, they must overcome not only twice the Might of the creature but each other's successes as well. If neither side garners enough successes, the undead creature reverts to its innate desire to destroy all living things.

Intercession of the Lords of Life and Death

The cleric beseeches the Lords of Life and Death directly to return an ally to life. In return, they ask some portion of the cleric’s own vital force be offered as a sacrifice. Those who return from the Dry Lands are never the same and often descend into despair and madness.

Intercession of the Lords of Life and Death Factors

Intercession of the Lords of Life and Death Effect

Invoking this prayer taxes the cleric’s current Nature by one. The prayer only works on a reasonably complete set of remains (e.g., missing an arm is possible, losing a head is not). Intercession requires a ritual space without interruption, and so may only be cast in the Camp or Town Phase. Unlike other prayers, Intercession requires a Check or a Lifestyle increase to invoke.

After a lengthy ritual, the subject is restored to life. Uncheck the Dead condition. If unable to pay these costs, the subject cannot be revived:

Orison of the Lords of Wisdom

The aloof Lords of Wisdom are reluctant to share that which mortal minds seem determined to reject. However, with an offer in kind, they may be persuaded to look up from their books and intercede in the affairs of mortals.

Orison of the Lords of Wisdom Factors

Duration (one turn is free): a Phase, an Adventure, a Season, Permanent

Domain: the wise of a stock (such as Shrewd Appraisal or Elven Lore), town or location, monster or group, thing

Orison of the Lords of Wisdom Effect

The Cleric grants the wisdom of a certain topic to themselves or a recipient. The affected character gains a new temporary wise in place of another wise of the cleric's choice. When the prayer is intoned, any advancement for the replaced wise is permanently lost.

If the duration is permanent, the change is permanent. Otherwise, it reverts to the old wise at the end of the duration. Passes and fails, as well as fate and persona spent on a temporary wise have no effect. 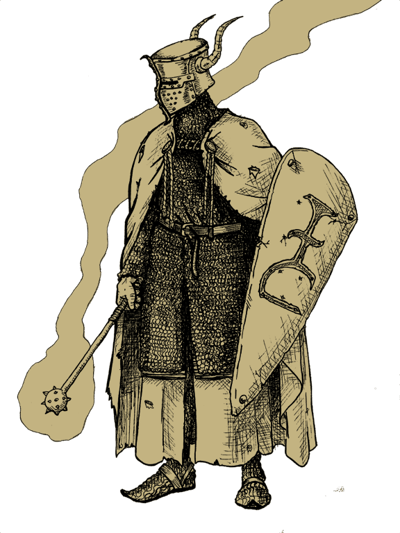 Enervation by the Lord of Entropy

A wave of pestilential terror issues from the cast of the cleric’s arm, corrupting and weakening all in his presence.

Enervation by the Lord of Entropy Factors

Number: individual, a few, many, a legion

Enervation by the Lord of Entropy Effect

Those afflicted by the Enervation gain a number of conditions in Grind order. Each additional success adds another condition in order of the Grind.

Each target may make a Will test against the margin of success of the caster to decrease the effect. For each success beyond the obstacle, one less condition is suffered. For large groups, test a representative fraction.

Thuldor Grimm, Exarch of Chaos, invokes the Enervation by the Lord of Entropy on a legion of reprobate mercenaries who dare to assail his fortress. The Obstacle is 6.

Through the use of forbidden magic and with the aid of his attendant clerics, Grimm attains 8 successes. The legion, already Hungry and Thirsty from the march, stands to become Exhausted and Angry as well. An Ob 2 Will test will allow the legion to avoid conditions; passing will avoid angry, an additional success will avoid Exhausted.

The Legion rolls five dice for will, earning 2 successes and reducing the Angry condition. Waves of Exhaustion roil through the legion, and a great groan can be heard from the host. Then the wyverns come.

Font of the Lord of Blood

As the cleric genuflects toward a pool of water, the surface clouds red and turns to blood.

Font of the Lord of Blood Factors

Location: in hand, nearby visible, nearby invisible

Duration: one turn, two turns, a phase, an adventure, a season, permanent

Font of the Lord of Blood Effect

Upon success, the water, potions, or wine affected are turned to blood. The affected fluids need not be in the same container, although the factors should be used for the most difficult affected container.

Non-vampiric characters cannot consume blood in quantities sufficient to alleviate the Hungry and Thirsty condition without being made Sick in the process. Potions turned to blood lose their effect until the end of the spell's duration.

Ablution of the Eternal Lords

Pure waters wash away the sins that poison the spirit and the flesh.

Ablution of the Eternal Lords Obstacle: 3

Ablution of the Eternal Lords Effect

The recipient of the Ablution is cured of any one condition, plus an additional condition for each success above the obstacle. Remove conditions in the following order (reverse of Grind): Afraid, Injured, Sick, Angry, Exhausted, Hungry and Thirsty. If all conditions are removed, any additional success makes the recipient Fresh.

Confession to the Lords of Regret

Hearing the confession of the penitent, the Lords of Regret grant them the power to alter themselves, and the cleric is their instrument.

Confession to the Lords of Regret Obstacle

The Cleric tests Ritualist against an Obstacle equal to the penitent's current Nature. Add one for each level of the trait that is desired to change.

Confession to the Lords of Regret

This prayer allows the penitent to change one trait that is not to their liking. A new trait is chosen for them by the group, following the exact procedure of a winter phase. The new trait is always at level one, and traits cannot be increased in level using this prayer. The GM may veto any selection made by the party, and if the Lords are so angered with the party's selection, they may levy a tax of Nature for wasting their time.

and yet, chaos reigns