Laughing in the Face of the Grim Reaper

Adventurers in Torchbearer often find themselves in situations out of their control or beyond their capabilities. In those moments, when all else has failed, there is usually nothing left to do but make light of the situation.

Gallows Humor is a new reward added to Torchbearer 2nd Edition, but it has a long and interesting history. I asked Thor about some of the background of the changes between the 1st and 2nd edition rewards, and here is what he said:

"We did a lot of playtesting of higher levels of Torchbearer in the eight years between the release of 1E and announcing 2E. What we found consistently was that Fate points became the hurdle for leveling. In many cases, players had spent enough Persona points for several additional levels but had reached a choke point with regard to Fate. A lot of that had more to do with opportunities to spend rather than earning. We addressed those issues. We tend to be pretty wary of reward bloat–we don't want players running around with so many rewards that they can spend them on every roll without thought–but we decided there was room to add back in a reward we had reluctantly cut in 1E: the humor point.

In Burning Wheel, you can earn a Fate point for stopping the table dead with in-character humor. We had the reward in early versions of Torchbearer 1E too, but cut it to streamline things and (ironically) to avoid Fate point bloat. To split the difference, we decided to make the new reward a bit more directed. Adventurers in Torchbearer are in a grim position. No one wants them. In every adventure, they risk their lives just to survive. So we reward the characters that can spit in the eye of death and find some humor when all seems hopeless. They find a way to laugh at the pain and the horror they face, and bring a smile or laugh to their companions while doing it. Everyone may look down on them, but they have bravura and courage. This is one of the things that sets adventurers apart from other people.

Crom, I have never prayed to you before. I have no tongue for it. No one, not even you, will remember if we were good men or bad. Why we fought, or why we died. All that matters is that two stood against many. That's what's important! Valor pleases you, Crom. So grant me one request. Grant me revenge! And if you do not listen, then the Hell with you! – Conan knows how to sweet talk a god.

As for embodiment, we didn't get rid of it. We made it more directed: Crisis. There were too many Persona points floating around. We needed to make them harder to get. Playing against a belief, accomplishing a goal, teamworker and MVP were sacrosanct. We didn't want to touch those. They are a core feedback mechanism of play. But a lot of feedback we'd gotten over the years was that many players felt uncomfortable with what they perceived as the "judging" aspect of Embodiment. It made them uncomfortable. Rather than get rid of Embodiment entirely, we decided to try to make it harder to get but also more clear-cut, so it's not as much about judging performance.

Crisis also feeds into the core question of Torchbearer: Will you grow beyond your circumstances to become a hero, to fight to change the world? Embodiment was just about revealing your character. Crisis asks you to reveal your character through action, to place your stamp on the world (or to recoil and be changed instead)."

From page 84 of the Scholar's Guide:

"If a character offers a grim assessment of their fate while staring down certain death, they are rewarded with one fate point. Gallows Humor is for dry comments that punctuate moments of improbable survival or that add a wry grin to moments of terror and bloodshed. Not a pun or caper, but a sharp crack in the face of the grim reaper. Gallows Humor is always performed in character."

The timing and roleplaying must come together to strike the right chord. When players hit that mark, they are rewarded with a Fate point at the end of the session.

Psychologically, a lot is going on with gallows humor. It is a pressure valve that offers a modicum of relief from an oppressive darkness. Like all mental mechanisms, this type of humor is an important part of our human condition and our ability to grapple with the madness of our world. In Torchbearer, the grind puts an increasing amount of pressure on the party. Plus, there is a lot of literal and metaphorical darkness in the dungeon, so gallows humor is meant to lighten the mood or bring a little bit of light before the darkness consumes us. 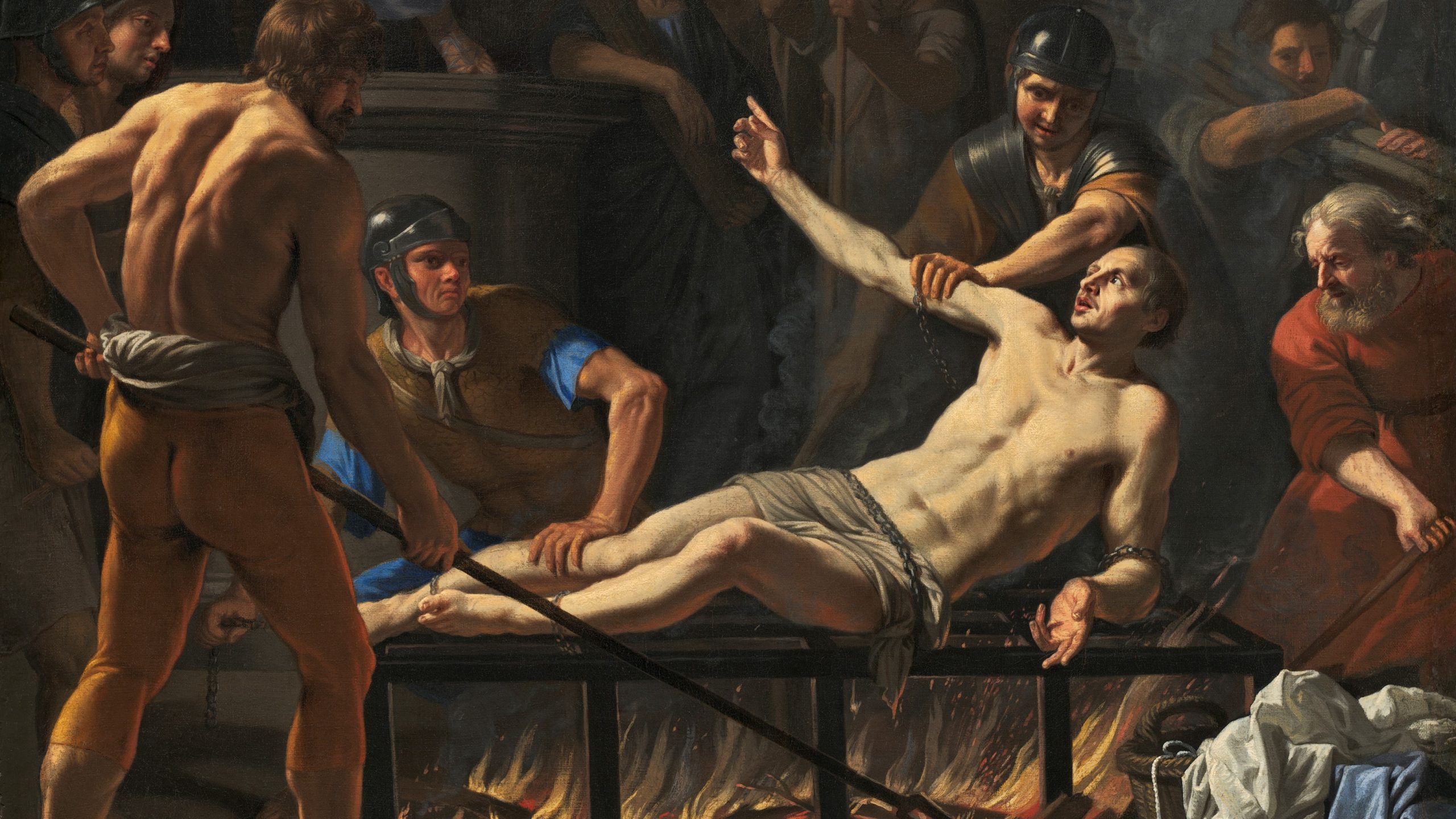 Looking back in history, we can see gallows humor across the world and the epochs. In many cultures, there is a stigma in death. Many cultural traditions emphasize dying a "good death," which often means heroically or in a moment of brave sacrifice. Talking about death can often be taboo, and there is especially a taboo about making light of the pain of loss. And, wherever there is a taboo or stigma, you will often find those that poke and prod at the boundaries of what is acceptable.

Supposedly Oscar Wilde's last words on his deathbed were, "Either that wallpaper goes, or I do." This type of retort highlights the personal perspective of the victim in gallows humor. Wilde was not commenting about someone else's death. His ultimatum was in jest, and he acknowledged his time to pass on was approaching. When the target of the joke is the self, the comment elicits a sympathetic response. However, really, the butt of the joke is death itself, and in taking this circuitous route turns it all around to cherish the sanctity of life.

Gallows humor never "punches down." A snipe about the poor, little kobolds that are about to die is not gallows humor. Gallows humor is a punch to your own face, or sometimes it might be punching up when acknowledging the power imbalance of an Immortal Lord, a king or queen, or a dragon.

In the real world, we see a lot of gallows humor and dark comedy in professions where workers routinely have to deal with death and bleak situations, such as in healthcare, the military, and funeral providers. These real-world jobs have a lot of similarities with our fictitious adventurers and the coping mechanisms of dealing with overwhelming trauma. These groups understand that the "inside jokes" are not meant to be shared outside of that group. Obviously, there is nothing funny about grief and loss. Still, gallows humor pokes at the situation's absurdity and is a very human (i.e., "flawed") response that is commonly understood only within the group.

In Torchbearer, all of the adventurers are in the same boat, and often that ship is on fire and sailing over the edge of a steep waterfall. With the results of Fail Forward mechanics, the group finds itself in a downward spiral time and time again. Gallows humor fills a piece of what we might call the "language of adventurers," or the common phrases and expressions that adventurers might develop amongst themselves. Gallows humor becomes another tool for players to use to develop their characters and their outlook on life, belief, or creed. Players can use gallows humor for coping, bonding, or detaching from a dire situation.

The rulebook gives the guidance that the joke is: "Not a pun or caper, but a sharp crack in the face of the grim reaper." So, the tone of the joke is important. The contrast of humor is like holding a torch in the darkness or whistling through a graveyard. In Torchbearer, the adventurers are desperately trying to survive, but they are caught in this vicious cycle of risking life and limb, exploring the depths and plumbing its riches. Along the way, they spill blood–both theirs and of others, and they spend days or weeks recovering in camp or town. Against this grim backdrop, gallows humor fills a unique role in the game.

When the party is about to face a fire-breathing dragon who can char them to a crisp, that is a moment for gallows humor. For example, before initiating the conflict with the dragon, the Halfling quips, "At least now I won't have to cook these fresh rations." Gallows Humor bundles it all up into a neatly delivered package that strikes at just the right moment before or in the face of that danger. If a comment is delivered after the conflict, then the moment for gallows humor has passed.

What is Not Gallows Humor

At the end of each session, the group gets to decide if a particular remark meets the criteria. The Gallows Humor reward is something that is very personal to each group. There is no prescriptive rubric beyond the above requirements, but mundane moments do not rise to the occasion.

For example, under normal circumstances, a few goblins do not pose much of a threat. However, if the party was injured, in dire straits with limited resources, and a bunch of goblins ambushed them, then that would certainly qualify as a moment of "improbable survival" because death is likely.

As with finding water, that is not a life or death situation under normal circumstances. Of course, water is necessary and a vital part of the game, but most of the time, there is not an immediate sense of doom when filling your waterskin at the river. However, in another situation where the party has run out of food and hit the grind several times, the party's fate might depend on one last-ditch effort to stave off death. So, yes, that would be an excellent opportunity to call attention to the horror of the predicament.

If your players are having a hard time trying to nail this reward, you may choose to help them out by telegraphing eminent doom really dramatically, giving them a little extra time to process a moment of peril, reminding them outright, and/or discussing it during the end-of-session debrief. Players have to work for and earn these rewards, but, ideally, the rewards should be the deeds the characters are striving for anyway–the “virtuous cycle.”

Until next time, be excellent, and grind on,