A guide to adapting monsters from another Fantasy RPG

It is no secret that Torchbearer takes its inspiration from earlier editions of Dungeons & Dragons. It's only natural that GMs should reach into their collections for old material to explore through the lens of this new game. Today we discuss converting monsters from other fantasy RPGs, but mainly the big one!

To illustrate the process, I'm going to convert a monster more or less at random. Together, we shall envision a Brain Beast.  This is a classic, a brain-beak-cephalopod hybrid whose name starts with "G" and rhymes with "Grell." I'm working out of the AD&D Monstrous Manual from 1993.

Step 0: Check if Someone Else Did it

As fun as it is to convert a monster, there's really no sense in reinventing the wheel. Search the BW forums, Underworld Wiki, Modules, and even the Menu of Monstacles to see if someone made a similar monster. Even if you decide to make your own version, you'll be able to steal ideas from them! Just be sure to give credit if you share it with the public. 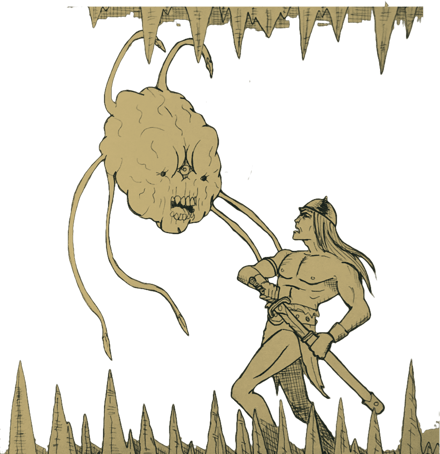 The first thing you'll want to do is read the entire entry. Don't worry too much about stats like the number of attacks or hit dice, we'll come back to those. Just get a feel for the monster, and make a special note of any cool language in the description. AD&D ecology sections are particularly amazing in the level of detail provided, and there's always an interesting factoid or two that barely came up in AD&D but will actually make a big impact in Torchbearer.

Don't just look for weapon language. Look for unique terms that describe behavior, appearance, and digestive tracts. Anything that stands out about the monster might be useful.

For example, when reading about my Brain Beast a lot of language jumps right out: "fearsome carnivore", "dangling tentacles", "weird language", "natural levitation", "arrogant and vicious", "paralytic poison", "immune to electricity", "tentacular motion" and "limited telepathy". So that's going to be most of our descriptors, weapons, and abilities right there!

Now that we have that collection of great vocabulary, let's pick some of the things that the monster does that aren't necessarily weapons. I think I'll choose "Levitating", "Paralyzing", and "Dangling Tentacles". Together, these do a good job of implying the beastie's preferred method of ambush.

While Might doesn't solely reflect size, that's definitely the first thing you should think about when converting. Our Brain Beast is going to be about four feet in diameter, so we flip open to Rebekah Bennington's exquisite Might Table on page 150 of the Torchbearer book. It seems to me that the Brain Beast is Might 3, in size at least.

Later in the process, if we encounter seriously powerful basic attacks (not special abilities) or strong magic resistance, we may increase this. (Spoiler: We don't.)

For Nature, the best points of reference are usually the creature's Hit Dice and Thac0, which were related concepts in AD&D. A creature with 10 or more hit dice should be at the upper end of the spectrum (Nature 10+) and a creature with only a few HD should have a low nature (2 or 3). Our Brain Beast has 5 Hit Dice, which is a little weaker than a Troll's 6+6. Therefore, we'll give it a nature of 7 (relative to the troll's Nature 8). Because the troll has a Might advantage, this is actually weaker than it may look at first.

This is more art than science. I've tried in vain to create a simple HD-to-Nature conversion table, but the number of exceptions that crop up make it more or less useless.

Before we decide which conflicts our Brain Beast prefers, we must give it some weapons. This is because weapons are a part of determining disposition.

This is a good time to remember that "weapons" apply to other conflicts besides fights, and so whatever language you mined from the entry can be a great guide as to what non-fight conflicts your beastie gets involved in.

Armor should only be included if there is some mention of special defenses in the entry, or if the Armor Class is remarkably low (2 or lower). That is, unless the illustration is wearing armor, then just give the monster that armor.

"Fearsome carnivore", "weird language", "limited telepathy", and "arrogant and vicious" all sound like they could be useful in some social conflicts. Based on the article, I don't think these beasties will be convinced of much by an adventurer, so we'll focus on trick.

"Natural levitation" , "paralytic poison", and "tentacular motion" all sound like they might pertain to a fight. The entry also goes into detail about two weapons specifically wielded by the species, the "tip-spear" and "lightning lance". Those are too awesome to leave out.

Lastly, some of these weapon descriptions can pull double duty by factoring into a flee conflict:

Our choice of weapons has guided us to focus on some conflicts. It's the usual suspects: Kill, Drive off, Trick, and Flee. Now we merely prioritize them and assign disposition based on the rules Thor set out in the Mighty Men and Monster Maker.

The "Morale" section is a good guideline for whether the monster prioritizes Kill vs. Drive Off. Our Brain Beast has an Elite morale, and so will be harder to chase away than most.

Now it's time to look at the special abilities we have. There may be something more we want to say about our weapons that didn't come across solely in the mechanics. Or we may just have weirdo powers that need to be accounted for. In this case, I stole some of the paralytic poison's function from the ghoul's paralysis ability.

Immune to electricity: Spells and effects that deal damage via electricity, such as the Hammer of Heaven, are not effective on the Brain Beast.

Natural levitation: The Brain Beast floats in the air naturally, and its levitation can't be dispelled.

Paralytic poison: Anyone knocked out of a fight by the Brain Beast's dangling tentacles can't be brought back to the fight via the defend action. Magic or prayers similar to the Prorogation of the Lord of Adders may have an effect on this.

A decent number of AD&D monsters have spell resistance. If you play a Torchbearer conversion long enough, you're bound to run into some monsters where it just doesn't sit right that low circle spells (Thread of Friendship) can affect the creature. At this point in the conversion, it's good to consider whether the creature should really have any natural spell immunity. If so, I recommend applying the creature's Might as a factor in spells cast upon it. Use sparingly. The Brain Beast has no such immunity.

The finishing touch is to concoct an instinct that will add flavor and give the GM a little direction about how to play the monster. Once again, the language in the entry itself will almost always suggest a compelling option.

Instinct: Hunt this territory to extinction before moving on to more fertile ground. 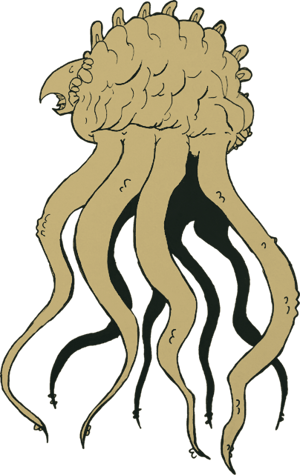 Instinct: Hunt this territory to extinction before moving on to more fertile ground.

Immune to electricity: Spells and effects that deal damage via electricity, such as the Hammer of Heaven, are not effective on the Brain Beast.

Natural levitation: The Brain Beast floats in the air naturally, and its levitation can't be dispelled.

Paralytic poison: Anyone knocked out of a fight by the Brain Beast's dangling tentacles can't be brought back to the fight via the defend action. Magic or prayers similar to the Prorogation of the Lord of Adders may have an effect on this at the GM's discretion.

The most monstrous of holidays draws near, and so this Mordite Monday is a Monster! Following on Thor's example on the official Torchbearer Blog—which introduced and reproduced stat blocks for...

Conflicts handle a variety of pivotal moments in Torchbearer: arguments, contests, and struggles of will, daring chases or escapes, and more. While the rulebook thoroughly explores “Fight”-style...

MyNamesArt has been active in the Torchbearer community for a while now, and he's started streaming some Torchbearer content! Check out his Twitch here and give him a follow. In this installment, he...