Re-introducing an undead goblinoid abomination born of a twisted mistake...

The most monstrous of holidays draws near, and so this Mordite Monday is a Monster! Following on Thor's example on the official Torchbearer Blog—which introduced and reproduced stat blocks for zombies, werewolves, and vampires—let's add a true Gygaxian Frankenstein's monster to the mix!

This horrific hybrid is the result of a mad doctor's experiments in search of immortality without recourse to undeath. A peculiar quirk in hobgoblin physiology renders them immune to the undead pathogen that causes ghoulishness.

Some scholars attribute this to an error by the Lords of Creation that they were simply unwilling to correct.

In any case, the afflicted hobgoblin becomes virulent but retains its higher-brain functions. Such a creature can only function for a brief time before necropsy consumes them bodily; unless, as the mad doctor discovered, the host is simultaneously infused with regenerative troll plasma! The constant regeneration of flesh, the virulent undeath of the ghoul pathogen, and the sadistic intellect of the hobgoblin form a sickening balance, resulting in the abomination known as the "Thoul". 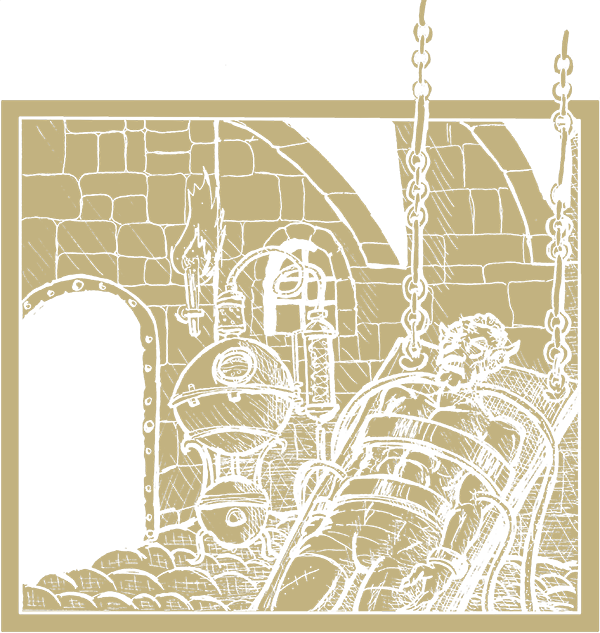 Instinct: Test the limits of my new-found powers.

Paralyzing Touch: The thoul’s touch paralyzes the living. The Defend action can neither restore disposition to paralyzed characters nor return them to the fight unless Breath of the Burning Lord is cast. Elves are immune to this effect.

Mindful Undead: Unlike other ghouls, thouls are normally affected by mind-affecting spells.

Regeneration: The thoul regains one lost hit point per round when weapons are selected. If a thoul is killed it will regenerate in the next night. Thouls can move about in the sunlight but suffer an additional factor while doing so. Thouls cannot regenerate hit points lost to fire.

Martial Prowess: The thoul retains its faculties in undeath and will ally itself with hobgoblins. It can wield any weapon and wear any armor.

MyNamesArt has been active in the Torchbearer community for a while now, and he's started streaming some Torchbearer content! Check out his Twitch here and give him a follow. In this installment, he...

Getting there's the hard part...