A preview of the human cavalier class from the upcoming Vagrant's Guide to Surviving the Wild.

Mark your calendars for Monday, October 7th. On that hallowed date, Mordite press will launch a Kickstarter campaign for our new book, The Vagrant's Guide to Surviving the Wild. Over 140 pages of mounts, new classes, gear, spells and prayers, monsters, and the fully-detailed expedition conflict; a little of everything for both players and game masters.

In the lead-up to the Kickstarter, we're going to update a bit more frequently on Mondays and Fridays while we tour the features of the book. We'll explore by taking a look at the iconic characters of the four new classes, and how they engage with the new expedition rules. 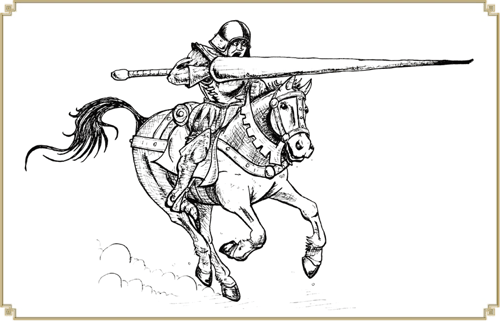 Belief: Though she will never be mine, I live only to draw the gaze of the Countess of Arrowdale.

Instinct: Always ensure the security of my campsite.

Sit and boast, demand your rights, do not fear those who prey on civilization.

Has friends (Dario the Orator), has parents (Hadriana and Malderra), has mentor (Carlos the Cartographer), no enemy.

Instinct: Find some mares and flirt with them.

Ramiro is a seventh son of a noble line of Feudor. His birthright ought to place him above these lowly adventurers, but his family has secretly gone bankrupt and doesn't have the means to support him any longer. Now he struggles to maintain appearances. He delves into ancient ruins for treasure so he can replace his finery and reclaim a position at court once more.

Ramiro is currently beset by an obsession with the Countess of Arrowdale, a noble who briefly complimented him in passing and named his horse a year ago. She is now betrothed to wed a foreign lord. Ramiro is desperate to accomplish something—anything—that will make the Countess notice him once more. It's not the healthiest attitude, and perhaps his new compatriots can help him grow out of it.

An expert rider, Ramiro has trained from a young age to serve in the King's cavalry. When mounted, he wields a lance to deadly effect. Though Connor is a mere workhorse, he was complimented by the Countess after a tourney and is, therefore, more precious to Ramiro than the mightiest of destriers. Ramiro packs a grooming brush to calm the animal and build a rapport, helping it recover from the angry and afraid conditions.

Connor the workhorse is a strong, patient brute. With the aid of a Laborer's tools, he could provide a +2D bonus to hauling heavy loads or other tasks involving sheer horsepower, but, alas, Ramiro won't be dirtying his hands with such tasks... will he?

Connor has a high Nature stat, higher than many other workhorses. Ramiro's Haggler skill, honed by many days spent in the royal stables of the Border Keep, aided him to choose a quality animal from among the stock. Like his master and most stallions, Connor is energetically preoccupied with romance.

When the time comes for the party to set out on their expedition, Ramiro proves most skilled at provisioning and planning for an excursion with the Steward skill. Connor will aid him with an expeditionary weapon: "Reliable: +1D Maneuver (Prepare)".

And an expedition might be on the horizon. A motley gang of vagrant adventurers is recruiting for a tough journey from Highwater to Elfland. They're not the sort of folks Ramiro would normally be seen with, but... the mission is in service of the Countess! Teaming up with them will certainly better his odds.

Come back next Monday for a peek at our next new iconic character and class, Qacha the Marauder!

Mark your calendars for Monday October 7th. In one week, Mordite press will launch a Kickstarter campaign for our new book, The Vagrant's Guide to Surviving the Wild. Over 140 pages of mounts, new...

Mordite legions, today we launch our Kickstarter campaign for our new book, The Vagrant's Guide to Surviving the Wild. Over 140 pages of mounts, new classes, gear, spells and prayers, monsters... a...

The Kickstarter campaign for our new book, The Vagrant's Guide to Surviving the Wild is now live! Over 140 pages of mounts, new classes, gear, spells and prayers, monsters... a little...