Behind the Scenes: The Making of The Grind

Written by D. Koch on Mon, February 4, 2019 7:58 AM
2 comments   |  Add a comment
When Luke Crane announced Kickstarter's Zine Quest back in November, we started kicking around ideas.

But, before we get into the making of The Grind, we'd like to say a great big "Thank You" from everyone here at Mordite Press. The launch campaign was very successful and has surpassed all of our personal goals. We have been blown away by the tremendous support from the community, and we are honored to make game adventure modules and supplements for you. The Grind is a labor of love, and we've got some awesome stuff cookin' for our little zine.

- Koch and the gang 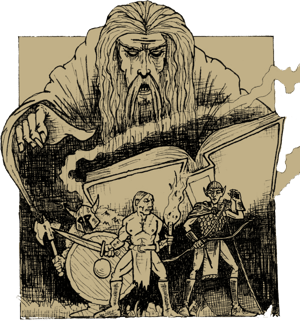 We arrived at "The Grind"—a jam-packed collection of Torchbearer content. We knew we wanted it to have a little something fun for players and GMs but had to quickly hammer out the details.

To begin with, we agreed the zine should be a throwback publication with rough pen and ink page elements. There is something immediate to the zine format, and we envisioned retaining as much hand-drawn content as possible.

Next up, Matt came up with the cover concept and an "arcane theme" that we will carry throughout the page elements and interior design of the book.

Matt drew up some sketches of a wizard overlooking a party of adventurers caught in the grind of an adventure. We went back and forth on a tweak with the elf, and Matt nailed it.

Paul came up with the term for the aesthetic: "doodles on a trapper keeper." That triggered the thought that all of our 1st Wave early supporters should receive The Grind in a 2-pocket folder decorated with unique drawings. Perfect! I remember back in high school we used to sneak Dungeon Magazine and Dragon Magazine around in our folders and notebooks to share around the table during lunch.

The logo came next. The logo had to scream "monster." Rob, Paul, and Owen had some suggestions and input. The early fonts were too music-oriented and invoked guitar shredding. Considering the title of the zine is "The Grind," some of the early fonts were a little too Guitar Hero-esque. 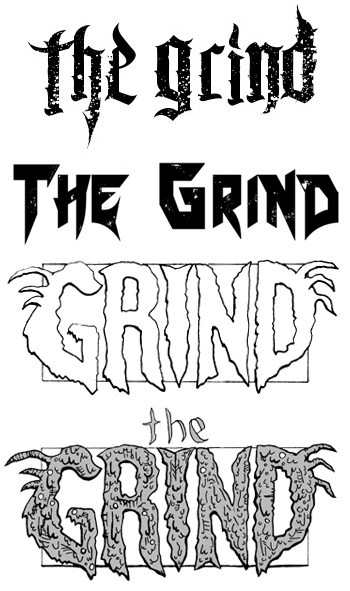 Fortunately, Matt had time to draw the logo to bring it all together. In the end, we dropped the "the" article at the last minute to simplify things.

Next, Ryan, author of our very first adventure "Crypt of Khaab'r," quickly gathered some monsters and magic items that he has been working on. There's a cool variety in the mix, which we'll cover in future announcements on the Kickstarter Updates page and maybe on future Mondays.

Then, as we brainstormed content, Owen threw out an idea to do a Wild West hack. Paul and I ran with it. There are a lot of Western RPGs out there, but we wanted to keep the spirit of Torchbearer as much as possible while adding the necessary ingredients.

We are super stoked that Jared Sorensen is onboard to include additional skills such as Brewer, Farmer, Miner, and many more!

Finally, I looked at adventures. We are currently planning on four adventures (three one-pagers and one full adventure). For my contribution, I had this idea for a while to do a spin on one of my favorite classics, but, first, I have to explain:

I started playing D&D when I was 9-years old. My older brother learned to play from his buddy and decided to show me the game one day. We saved our money (I had a local newspaper route) and bought the Expert's set (Blue Box), and we started the Isle of Dread. We were so excited, we set up the game right on the floor. However, the problem was we didn't have enough money for the Basic set (Red Box) nor did we understand it was required to create characters and start play. My brother did his best to recall all the rules, but we got a lot of things wrong. Still, we had so much fun that it has fueled my love of creating role-playing games ever since.

Now, I'm working on my own take on the Isle of Dread—to create an original island adventure suitable for the strengths of Torchbearer.

My homage is a one-page adventure called the "Dreaded Isle," and it's inspired by the parts I liked best from the module and the improv that my brother created. There's some serious wilderness exploration minus the dinosaurs and post-colonial tribal tropes. It is a terrifying place full of dangerous traps.

This is just a little bit of everything we have planned. Lots more on the way!

The Grind is available exclusively in print, and you can get it until the end of the month on Kickstarter:

"The Grind" and logo artwork by Matt Gibeault

Adventurers in Torchbearer often find themselves in situations out of their control or beyond their capabilities. In those moments, when all else has failed, there is usually nothing left to do but...