Guidelines for prepping a Torchbearer Session from a One- (or Two-) Page Adventure.

Most of the adventures I run in Torchbearer, both at home and at conventions, are drawn from one or two page adventures by a variety of authors. I’ve found that using small adventure locations helps each room feel significant and keeps up momentum in both campaigns and one shots. It usually only takes a few steps to convert an adventure to Torchbearer, and depending on the players’ interest in the site (and the loftiness of their goals there) this small amount of prep can last for several sessions.

I’ve been prepping to run Sean Winslow and Michael Prescott’s In the Care Of Bones for PAX Unplugged and the steps I’ve taken are illustrative of my approach to prep in general. 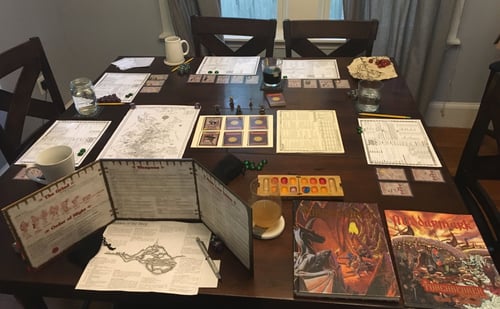 This is likely to depend on where this adventure falls in a campaign.  It might come from the ‘Leaving Town’ roll or from rumors or research in town.  You can tie any of those results into an adventure to give the party more focus.  For this one-shot, I added an NPC to the site. One element I like about this adventure is that it has a reputation for being a healing temple, but is actually a Temple of Acceptance.  To emphasize this, I tell the party that they are looking for a young nobleman who had ventured to the temple looking for a cure for his ailing father, and never returned. The site has built-in hooks from it’s potential treasure and discovery. The lost NPC just broadens the possible range of character hooks and makes good fodder for goals. Some players might focus more on the loot while others push for rescuing the NPC.

It can be tempting to spot things that look like a challenge in an adventure and then note the obstacle (Whole party up a vertical pitch?  Ob 5 Dungeoneer) but I try not to do this because it can lead to presenting players with tests rather than situations. Instead, I’ve found it’s more useful to note signposts: pieces of information  that the party needs when they enter an area. In the Care of Bones has an enormous golden tree at the top of a hill. I bring this to the party’s attention early, and I make clear that its unseasonal hue suggests something is off.  By giving information that is actionable, even if it’s just a meaningful direction to travel in or a type of clue to look out for, it puts the ball in the players’ court without pushing them toward a test.

If there are interior areas, write whether each is dark or dim light. I try to make this stand out so I can’t forget when I’m running it.

Highlight Twists, and Foreshadow Them

Some things aren’t a problem right now, but they could be. Towards the end of a long session, it gets harder for me to improvise interesting twists.  Having a few marked ahead of time can be really useful for this. Are there structures that could collapse, interesting monsters that could show up?  The other value in noting twists is that it allows your to more effectively foreshadow them. Describe how the Spring rivers are overflowing their banks, onto the flat plains around them. That makes the twist all the more satisfying when the flood comes and washes out their camp. When they see the gnome skeleton in the spider webs, they know that the stakes for their dungeoneer test to climb down the passage are high.

I try to use existing stat blocks, modified slightly, whenever possible. For In the Care of Bones, I just used the Stone Spider from the core book.  To reflect the ancient wisdom of these spiders (granted by the ghosts that keep them company) I gave each a Fate and a Persona.

I replaced the giant Harrier with a Harpy.  Both because the Harpy is in the core book and because I thought it matched the “Siren’s Song” theme of the rest of the adventure.  For more unusual creatures, I might create a stat block, but that is more out of curiosity than necessity A single change is often sufficient to make the monster stand out.

Many adventures will come with unique items or magical effects that can either make the adventure stand out or cause confusion if they overload the rules with special effects or exceptions.  Therefore, I try not to do is create a mechanical effect for every magic item. Some things can stay descriptive and can factor into good ideas. In The Care of Bones details a Panopoly Scroll that grants visions to its user.  I haven’t created any additional rules around this. If a player uses it, I can just describe the visions they see (likely playing off their belief and goals) and then its used up. Other things suggest more granular detail. The Waters of a God of Acceptance might offer recovery from angry or afraid without a check, but they tax a point of Nature (as acceptance of suffering teeters toward indifference toward it).  It’s worth reading with an eye for what effects can be portrayed sufficiently within the fiction, and which require their own mechanical effects.

Look Out for Unusual Treasure

Making sure that an adventure is full of evocative treasure is a good way to balance all the challenges you’re sure to put in the party’s way.  For In the Care of Bones, I thought about what gear the (inanimate) skeletons might be wearing, and how many hands it would take to haul out the statue.  In any site, adventurers can only see what you describe, so be sure not to elide any details that might be profitable for them. If they decide to hock the giant statue of Loss, that’s their good idea, but an evocative description might make them more likely to consider it.

High in the steppes of Barbaria, the epics tell of Khaab’r, a brave and fearsome wanderer who rose to become King of his tribe. His dagger, Tiger’s Tooth, was his constant companion throughout his...

The Grind PDF is Now Released

Mordite Press' much-too-big-to-be-a-zine supplement for the Torchbearer RPG — The Grind — is now available in PDF form.

When Jared Sorensen jumped in and started writing the Cavernous Underworld territory for the upcoming expansion to the Vagrant's Guide, we were excited to say the least. But it was only the tip of...