Today is the final day of the Kickstarter campaign for The Vagrant's Guide to Surviving the Wild, the Torchbearer supplement for travelers in the wilderness. Over the course of the campaign, we've introduced you to the iconic sample characters for the four new classes, revealed our approach to mounts with a mind of their own, and introduced the elements of the new Expedition conflict: territories, threats, and impasses. 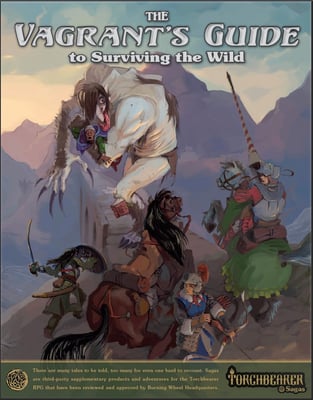 But there is one big, weird part of the Vagrant's Guide that I think shows off just how much we've considered in our nigh four years of development: flying beasts on the expedition!

With the Greatest of Ease

Whatever it's worth to you, we at Mordite Press have played fantasy RPGs for a very long time, through many different fads and styles of play. One of the things we've noticed is how overland travel systems tend to break down a bit when magical travel—be it flight or teleportation—enters the game.

Yes, most Torchbearer characters are struggling to survive, and could never hope to obtain something as fantastic as Pegasus or a flying carpet. But, there are those storied few that obtain this magic (not to mention a flying castle or two), and we were determined to ensure that the expedition conflict did not break when magic was introduced.

The exquisite Middarmark map includes a scale for aerial travel, and using the training methods from the Rider skill, even mid-level characters could, in theory, gain access to flying mounts as a travel tool. When the entire party has the flight advantage on an expedition, they roll attack against attack as a versus test, like a bow in a fight. As you vault over the landscape, there are many threats that you can simply avoid by carefully choosing where you land.

But there are also threats that accost even the airborne. The party must still stop and rest on occasion, and during such rest, you still need clean water and a secure campsite. Many threats have the "aerial" keyword, meaning that even if you can easily bypass the treacherous cliffs, a torrential rainstorm will still cause problems. We've accounted for the mechanics of flight in every single one of the 200+ threats in the Vagrant's Guide's territories.

And we could have left it at that...

But we didn't! We packed the Vagrant's bestiary with a score of iconic monsters from mythology and fantasy game editions. From the hippocampi to hippogriffs, pterosaurs to pterripi, if a flying monster is commonly found in fantasy RPGs as a mount, it's in here. And if it doesn't eat you first, you might try to ride it!

Of course you can't buy a riding gryphon at the village market. If you want access to that awesome power, you'll need to find, capture, and break the mount using your own skill. We've included an expanded treatment of the beast-taming rules offered by the Rider skill, including explicit guidelines for disposition, action meanings, weapons, and costs. IF you tame the beast (and it is NOT easy), you can saddle up and take to the skies.

The End of the Road

Today is your last chance to support our print run of The Vagrant's Guide and own a copy of your own. The PDF will be available for retail only after it is available to our backers, so don't wait!

Get the book before it is too late.

Many thanks to all our friends who have already backed us.

Mark your calendars for Monday October 7th. In one week, Mordite press will launch a Kickstarter campaign for our new book, The Vagrant's Guide to Surviving the Wild. Over 140 pages of mounts, new...

The PDF of The Vagrant's Guide to Surviving the Wild is now available for download at DriveThruRPG.com! If you were a kickstarter backer you should already have received your email with the link to...

The Delver's Guide to Surviving the Underworld

The Delver's Guide to Surviving the Underworld is a FREE expansion to The Vagrant's Guide, brought to you by Jared Sorensen of Memento Mori Theatricks. If you backed the Kickstarter or bought a PDF...